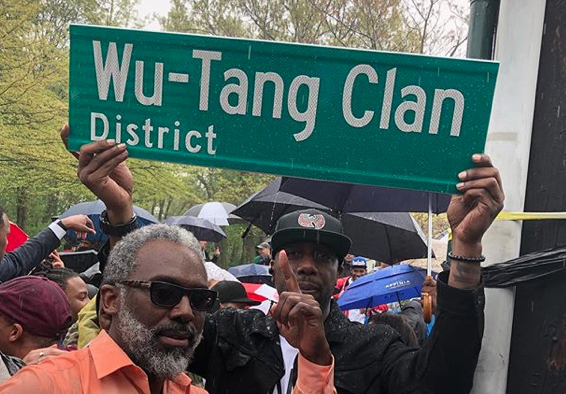 Yesterday (May 4), part of the Park Hill section of Staten Island, New York was officially renamed the “Wu-Tang Clan District.” The rechristening is in honor of RZA, GZA, Method Man, Raekwon, Ghostface Killah, Inspectah Deck, U-God, Masta Killa, and the late O.D.B. Meth’, Raekwon, Ghostface, and U-God are some of the Wu founders that grew up in this section of Shaolin, as well as Cappadonna. The New York City Council voted unanimously in favor of renaming the area. The sign stands at the intersection of Targee Street and Vanderbilt Avenue. At the ceremony, which Inspectah Deck and others attended, a sign was added to the corner. Visitors can now officially “Enter the Wu-Tang.”

City council member Debbie Rose had this to say in conjunction with the unveiling. “This is a great day where we have an opportunity to honor our own hometown heroes, the young men who put Staten Island on the map internationally. They overcame all types of challenges, to not only become Rap artist and Hip-Hop artist but to inspire and challenge the music world,” Rose said, according to The Staten Island Advance.

To commemorate the moment, Raekwon the Chef was among the Clan founders who uploaded a video of the street sign unveiling on the rainy Saturday afternoon. The crowd present for the event can be heard cheering and chanting “Wu-Tang” as the reveal commences.

The Wu-Tang Clan also have their own official day in New York on November 9. Now, the Wu-Tang can be celebrated for an entire day, in a neighborhood that they made proud.

This month, Wu-Tang, Public Enemy, De La Soul, and DJ Premier are part of the Gods Of Rap Tour in the United Kingdom. Wu is in the midst of their 25th-anniversary run. On May 10, the Sacha Jenkins-directed documentary, Wu-Tang Clan: Of Mics And Men, will make its television debut on Showtime. RZA is also executive producing the dramatic series, Wu-Tang: An American Saga for Hulu that is currently revealing some of the actors (and fellow Rap artists) who are playing the members of the Clan and its affiliates. Additionally, RZA and band-mate Ghostface Killah are making a Horror movie, Angel Of Dust, based on their real-life experiences.