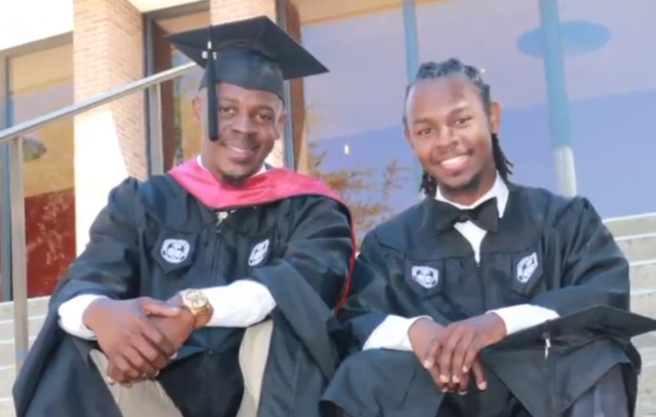 Father, 49, and Son, 23, Graduating from South Carolina State University at the Same Time

One South Carolina family will have much to celebrate this week when father Antonio Gathers and his son, Brandon, graduate from college at the same time.

The father-son duo will walk across the commencement ceremony stage within moments of each other as they graduate from South Carolina State University together on Friday.

Antonio, 49, will be earning his master’s degree in Rehabilitation Counseling, the news station reported, and Brandon, 26 years his father’s junior, will be receiving his bachelor’s degree in Business Management, according to ABC 4.

While the two will be able to celebrate the special occasion, there has been a lot of hard work to get to this point, and Brandon said his father has been a continued source of motivation through his four-year college career.

For Antonio, his son’s own determination is what helped him feel encouraged to pursue the educational milestone.

“He was an inspiration to me, just seeing his perseverance,” he said. “Doing other things, and having a full-time career, you kind of put yourself on the back burner. And it was just really important to me to get his degree to pursue another avenue in my life and in my career so that I could help people.”

Both men will receive their degrees at Oliver C. Dawson Stadium Friday evening.

“It is so real right now,” Antonio — who took his classes online while Brandon attended the campus — admitted to WAFB. “Because as he aforestated, I never would have thought that this day would be here, that we would be graduating together.”

“It’s a little late in life,” he added of earning his masters.

But through Antonio’s journey, he was able to experience something unique with his son, who will likely cherish this day and the lessons learned from it for the rest of his life.

“He’s like my inspiration,” Brandon told WAFB. “He is the perfect model of a black male father figure.”

There family’s inspirational day comes just a week after a Michigan mother decided to skip her own graduation ceremony to attend her son’s commencement, only to be surprised when the university presented her with a degree during the event.

A video of the surprise posted by the university has since been viewed more than 888,000 times since it was published on Twitter on May 4, and, like Antonio and Brandon’s story, speaks to the influential power families have to inspire each other.