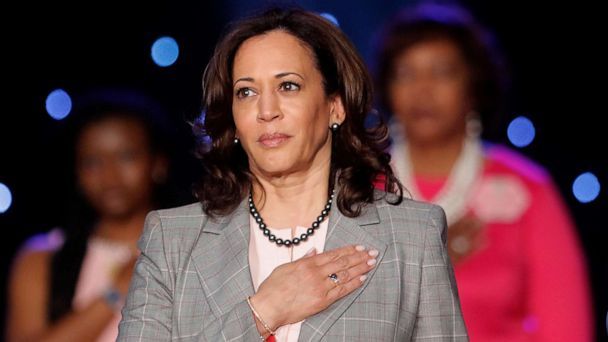 SENATOR KAMALA HARRIS AND ANY OTHER BLACK WOMAN WHO MAY ENTER THE RACE DESERVES TO BE THOUGHT OF AS MORE THAN JUST A VICE-PRESIDENTIAL CANDIDATE.

When asked for comment on recent chatter that she would make the ideal vice presidential candidate, Senator Kamala Harris offered a humorous but nonetheless pointed reminder that she is presenting herself to the nation as lead singer, not the doo wop pop chick in the background.

“I think that if people want to speculate about running mates, I encourage that ‘cause I think that Joe Biden would be a great running mate — as vice president, he’s proven that he knows how to do the job,” she explained to Daily Mail political reporter Emily Goodin, who asked Harris if she’s sick of talk of her being the perfect VP for Joe Biden. “And there’s certainly a lot of other candidates that for me might make a very viable and interesting vice president.”

There are arguably only four Black women that could conceivably run for president in 2020 and win.

They include Michelle Obama, who for quite some time now has told folks begging her to enter politics as a candidate to leave her alone and go find themselves some business. Although some may roll their eyes at me and Gayle King for the suggestion, I genuinely believe Oprah could win a presidential election. We live in a society obsessed with celebrity, and as Doreen St. Felix noted last year a measured, thoughtful examination of #Oprah2020, her particular level of celebrity has long fueled a dream of a Harpo administration. And while Donald Trump the scammer never embodied the sensible CEO who could run the government more efficiently than those lifelong bureaucrats in Washington as foretold in GOP folklore, such mythology continues to permeate the minds of our media and the electorate it so often poorly covers, so it remains a narrative Oprah could exploit. However, like our former First Lady, Oprah does not want to be bothered with the misery that comes with political life in general much less the vitriol that awaits the first Black female president.

That leaves us with two women, the actual factual politicians Kamala Harris and Stacey Abrams.

Harris launched her campaign in January with a nod to Shirley Chisholm, the first woman and Black person to seek the nomination for president in a major political party in 1972. There may be spirited debate among some Black folks as to whether or not Harris’ prosecutorial background prevents them from supporting her candidacy, but that conversation is still rooted in a serious consideration of her candidacy.

And as Beto O’Rourke tries to relaunch his campaign after squandering all of that pretty white boy privilege, Stacey Abrams continues to look better in the light (no matter the shade of it all).

Both are accomplished women who enjoy national name recognition with the potential to piece together a diverse coalition of voters yet somehow when it comes to too early talk of a vice presidential pick, only their names have come up.

It started in March when it appeared that Joe Biden’s advisers were leaking word that the former vice president would want to launch his campaign with Abrams as his designated VP. Only other white men championed such nonsense. One Abrams adviser rightfully described the move to Buzzfeed News as “exploitative” and reeking of “entitlement.”

I understand a lot of white journalists are buying into their self-authored fable that only another old white dude can defeat the old white dude with apricot overtones presently in the White House in the next election, but please stop assuming the rest of us buy into such a crock. Biden is  not the only viable contender. Moreover, the other white men running aren’t exactly sure-fire bets either.

For all his national attention, Pete Buttigieg is out here asking his white audience to help him locate Black people due to political reality. Meanwhile, my fellow Texan Beto O’Rourke is apologizing for his existence while live streaming his haircuts. As for Bernie Sanders, unless aunties move his democratic socialist way en masse, when it comes to 2020, it’ll be the second verse same as the first (2016).

Why are none of them being talked about as a potential vice presidential candidate for Kamala Harris or Stacey Abrams? Same question for Elizabeth Warren, Kristen Gillibrand, or the one that allegedly throws binders at staff members (I’m not letting it go, that’s labor abuse)?

What most grates me is that it’s not even necessarily a good strategy.

Yes, Kamala Harris is Black, and of course, the Democrats need a spectacular showing from Black voters to win the presidency, but the author of the crime bill who is still defending his choice coupled with the prosecutor who continues to have to answer for parts of her record may not exactly motivate the masses. It’s not just elders the Democrats need, but the Blacks who grew up with Jodeci and now either have a child named Jodeci or have seen that name at least six times by now in a high school program.

Stacey Abrams just had a fight with Jim Crow last fall. Just this week Joe Biden has been talking as if he can take Jim Crow’s party out to brunch and magically restore bipartisanship. Different strokes, I suppose, but I’d rather delusion not lead us when we have realism speaking elegantly before us.

Regardless of the actual outcome of the 2020 election, though, every candidate deserves the same level of respect — which makes it all the more irritating that only Black women are being touted for the number two position. It’s May 2019. A lot can happen. A lot will happen. The old white guy doesn’t have to be the inevitable, and even if he proves to be the case, the possible out to have more space to will its way without interference.

Certainly not for no damn Joe Biden.