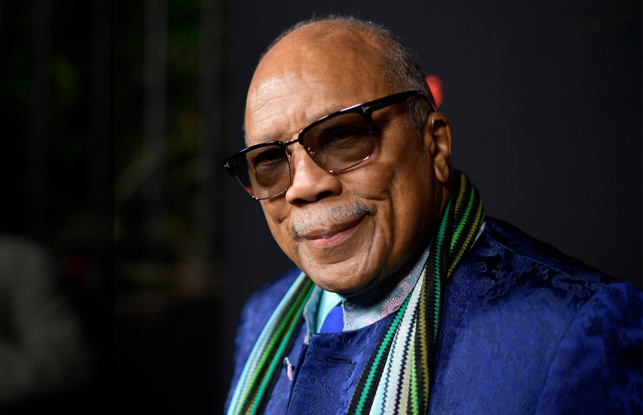 Throughout the course of American history, black folks have relied on artistic expression to both anesthetize our pain and serve as a creative conduit.

The Broad Museum’s groundbreaking exhibit Soul of a Nation: Art in the Age of Black Power 1963-1983 focuses on the awe-inspiring contributions that Black artists made between the apex of the Civil Rights Movement and 1983—the year Martin Luther King Jr. was finally honored with a national holiday.

And because there is no better embodiment of black excellence or artistry, on Friday night, the legendary Quincy Jones curated an evening of music and magic as hundreds gathered at The Broad Museum in Los Angeles to bask in the beauty of black power.

The evening kicked off with an introduction from the Grammy Award-winning producer and composer himself before marketing genius extraordinaire Bozoma Saint John took her rightful place, commanding the stage as the evening’s emcee.

As drinks began to pour, L.A.’s own Terrace Martin—the heir apparent to Jones’ melodic throne—opened his soothing set with a bit of Herbie Hancock, before segueing into his own lush jazz arrangements. One of Martin’s irrefutable strengths is his profound ability to bring the best out of burgeoning artists. To that end, after showcasing his own catalog, he and his band provided the soundscapes for a number of subsequent crooners throughout the course of the night.

First up was Cincinnati import Arin Ray, who dazzled the crowd with his soul-stirring vocals before songstress Eryn Allen Kane seized the stage and did the damn thang herself. It was rising star Alex Isley—yes, that Isley, as her father Ernie is one of the iconic Isley Brothers—who stole the show and left the audience mesmerized with her atmospheric “Into Orbit,” in which she pleads to be propelled to the moon and stars under the intoxicating stewardship of love.

While other artists such as Cory Henry eventually ignited the stage with spirited forays into funk and gospel, the night wasn’t just about the music—it was also about the message. Specifically, that of black power and its various unyielding and unrepentant manifestations.

“We’re living in a pivotal time, and Soul of a Nation is a reminder that it is time to either fight or unite, and I’m telling you right now, the only answer is to unite!” Jones told The Root.

To that end, the Soul of a Nation exhibit inside the museum serves as a sanctuary for black pride and self-expression. With contributions from more than 60 influential artists—including the likes of Romare Bearden, Barkley Hendricks and Charles White—the two-story exhibit features abstract paintings, murals, brilliant photography, sculptures, and other more to encapsulate both our plight and our triumphs as the unheralded artisans of America. It’s a brilliant collection of style and social justice that will empower the meek and awaken the soul.

One of my favorite paintings at the exhibit was Barkley Hendricks’ “Icon for My Superman (Superman Never Saved any Black People—Bobby Seale).” Casual eyes might mistake it for merely a clever depiction of a streetwise-Superman, when in actuality its a call to arms for black people to honor ourselves instead of waiting for permission from the dominant culture—something countless artists, writers, musicians and creatives are currently doing as we embark on a new-age Black Renaissance.

“Here we find the Black artist as the superhero,” the explanation of the painting reads. “Painting himself into history rather than waiting for someone else to confer the honor upon him.”

In all, with its stellar intention and curation, it was an unforgettable evening that provided a fitting tribute to both our creativity and resiliency as a people—which I would expect nothing less from a maestro as revered Quincy Jones.

“It’s an absolute honor to be involved in the musical component of The Broad Museum’s Soul of a Nation: Art in the Age of Black Power exhibition because you’ve got to know where you come from, in order to get where you want to go,” Jones told The Root. “Without that knowledge, we are in danger of repeating history— and I don’t mean the good parts.”