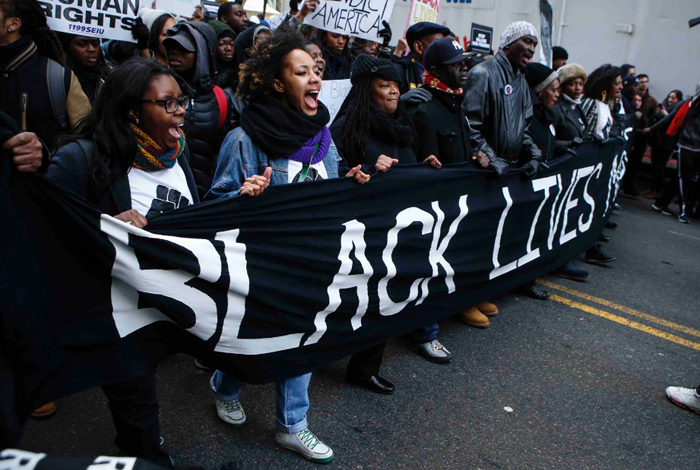 It was a ruling that failed to register widely in terms of national news, but could have potentially devastating effects for protesters around the country—and anyone tasked with keeping police officers accountable.

On May 28, the Supreme Court made it more difficult for people who say they were arrested for exercising their free speech rights to bring lawsuits against the officers who arrested them. This could include behaviors like throwing insults or refusing to talk to officers, or protesting and filming the police.

In Nieves v. Bartlett, the high court delivered a split decision, finding that a police officer need only prove probable cause for an arrest to keep a lawsuit from moving forward. The majority opinion was written by Chief Justice John Roberts, with Justices Ruth Bader Ginsburg, Neil Gorsuch (yes, I typed that right and you read that right), and Sonia Sotomayor each penning dissenting opinions, the Washington Post reports.

The ruling, centered on a case where an Alaska man sued a police officer for what he claimed was a retaliatory arrest, was founded on concerns that police at certain events “like an unruly protest” could be exposed to “overwhelming litigation risks,” according to Roberts.

“Any inartful turn of phrase or perceived slight during a legitimate arrest could land an officer in years of litigation,” he added.

But the decision did try to create a carve-out for thinly veiled arrests for either ludicrously common or little-known infractions.

“For example, at many intersections, jaywalking is endemic but rarely results in arrest,” Roberts wrote. “If an individual who has been vocally complaining about police conduct is arrested for jaywalking at such an intersection, it would seem insufficiently protective of First Amendment rights to dismiss the individual’s retaliatory arrest claim on the ground that there was undoubted probable cause for the arrest.”

Even with the carve-out, some First Amendment advocates are calling the decision a blow to free speech rights, especially in the face of expanding state authority. The decision is likely to have a disproportionate impact on two groups most likely to check government officials that have exceeded the bounds of their power: protesters and the press.

In a statement sent to The Root, Esha Bhandari, staff attorney with the ACLU Speech, Privacy, and Technology Project, wrote that the high court’s decision “disappointingly imposes additional hurdles on people seeking to vindicate their First Amendment rights.”

“The ability to bring retaliatory arrest claims is critical for the public to hold police accountable and ensure that police don’t selectively enforce the laws against people they disagree with, including those who criticize them,” Bhandari continued. “This is a particularly necessary protection for protestors, who are often arrested under vague laws that may not be applied equally.”

Garrett Epps, professor of constitutional law at the University of Baltimore, in a recent analysis of the decision for the Atlantic, questioned if “the real purpose of the Roberts rule is to provide all but complete immunity to police.”

He explained the way the ruling would affect potential lawsuits against officers this way:

[If] you cheese off an officer by bad-mouthing the mayor (or the cop), you can be arrested if there is probable cause you did something wrong. And you can’t sue for “retaliatory arrest” unless either the arrest is for an offense such as “spitting on the sidewalk” or “affray,” which police virtually never use, or a hundred people are doing the same thing and only the ones engaged in protected speech were arrested. The burden will be on you to prove that the charge is rare—or that others were doing exactly the same thing at the same place and time and weren’t arrested. (I suspect that many courts will require proof that it really was exactly the same thing.)

After that, you have the burden to show that the “expressive activity” (speech, picketing, carrying a sign, etc.) was the real cause of the arrest. The “causation” element is hard, since you have to prove the officer’s state of mind. Officers sometimes tell you their motivation, in remarks such as “You can’t talk that way about our military.” But (surprise!) it turns out those won’t help you, because Roberts has modified his rule thus: “Because this inquiry is objective, the statements and motivations of the arresting officer are ‘irrelevant.’” Some other evidence is needed, or the case will be dismissed before trial.

While Roberts himself used “jaywalking” as an example of a trumped-up, potentially retaliatory charge, Garrett notes that police don’t often have to dig up obscure charges to justify an arrest. “Disturbing the peace” or “failure to obey a lawful order” often more than suffices.

If you’re a Black Lives Matter protester—or anyone who might, someday, need to film the police to hold them accountable—this latest ruling should be chilling. In 2017, St. Louis police arrested 307 people in less than three weeks; lawyers, religious clergy and members of the community were arrested for “trespassing” in their protests against a white police officer who was acquitted after killing a black man. And last year, in Georgia, police used a little-known anti-KKK law to arrest more counter-protesters at a Neo-Nazi rally than actual white supremacists.

“The power to arrest is a potent tool for suppressing speech because even if charges are later dropped, arrestees must undergo the ordeal—and dangers—of being booked and jailed, and they may have to disclose the arrest on future job and housing applications, among other ramifications,” Slate observed.

“In our own time and place, criminal laws have grown so exuberantly and come to cover so much previously innocent conduct that almost anyone can be arrested for something,” wrote Gorsuch. “If the state could use those laws not for their intended purposes but to silence those who voice unpopular ideas, little would be left of our First Amendment liberties, and little would separate us from the tyrannies of the past or the malignant fiefdoms of our own age.”