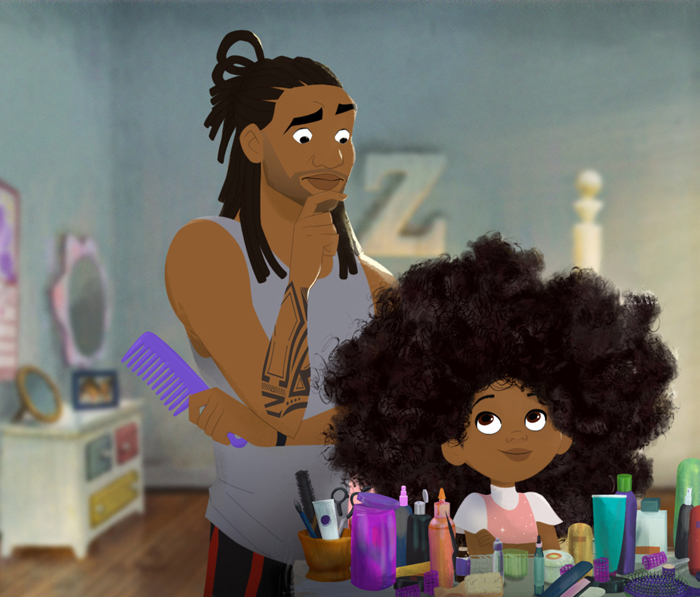 Hair Love, an animated short film that began its life online with a record-breaking Kickstarter campaign, will make its theatrical debut in North American cinemas on August 14, playing ahead of Sony Pictures Animation and Rovio Animation’s The Angry Birds Movie 2.

The short tells the story of man vs. coif, centering on a father learning to contend with his daughter Zuri’s wonderfully wild hair. The film is the brainchild of BlacKkKlansman executiveproducer Matthew A. Cherry, who initially developed Hair Love as a Kickstarter campaign back in 2017; the project sought $75,000 to fund its production but ended up hauling in over $280,000, setting a new record for short-film financing on Kickstarter. Hair Love was later turned into a bestselling children’s book, released earlier this year by Kokila Books/Penguin Random House.

“To see this project go from a Kickstarter campaign to the big screen is truly a dream come true,” says Cherry in a press statement. “I couldn’t be more excited for Hair Love to be playing with The Angry Birds Movie 2 in front of a wide audience and for the world to see our touching story about a black father trying to figure out how to do his daughter’s hair for the very first time.”

Cherry directed the film alongside animators Everett Downing Jr. (Up, WALL-E) and Bruce W. Smith, who famously created Disney’s 2001 animated series The Proud Family; Peter Ramsey (Spider-Man: Into the Spider-Verse) and Frank Abney (Toy Story 4) serve as executive producers. Celebrity supporters for the project include Insecure star Issa Rae, who lends her voice to the film as Zuri’s mother, as well as Jordan Peele, Yara Shahidi, Gabrielle Union, Dwyane Wade, and Gabourey Sidibe, who are among the short’s many, many passionate producers.

Hair Love’s theatrical release makes it the only animated short from a major studio to be released in U.S. theaters so far this year—and since it’s never too early at EW to talk about awards, the film should thus qualify nicely for the Academy’s Best Animated Short category, which in 2020 could also include Pixar’s Purl, Nara Normande’s Guaxuma, Bruno Collet’s Mémorable, and Renee Zhan’s Sundance champ Reneepoptosis.