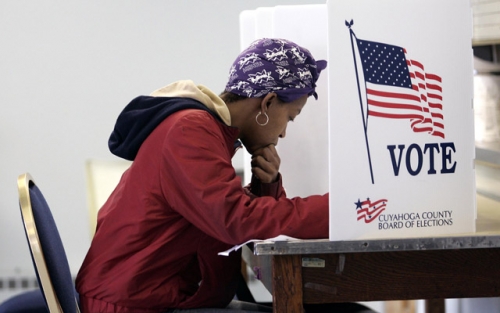 The Policies & Candidates on Black Women’s Minds for 2020

By Jessica A. Floyd

Politicians who want the trust and votes of Black women should address an oversight evident in many past campaigns, experts say—messaging specifically focused on Black women and the issues that impact them.

During the 2018 midterm elections, 92 percent of Black women voted for Democratic candidates, reliable support that Democrats have counted on for years. However, this time around, Black women voters are holding the 2020 Democratic primary candidates to task by pushing for platforms that address their concerns.

“We were really clear with the Democratic Party in 2016 that you don’t get to milk our vote,” said Patrisse Cullors, co-founder of Black Lives Matters. “You don’t get to do the run-of-the-mill campaign because we are dying; our communities are at risk.”

Cullors said her organization and other social movements have made 2020 candidates aware that they are accountable to diverse communities.

Top polling candidates are appealing to Black women by promising legislation to address their needs, and hiring Black staff to craft the narratives and directions of the campaigns.

Collectively, the senators proposed legislation that would allocate funds to states and hospitals to develop standardized best practices to prevent and respond to pregnancy-related complications. “Kamala Harris and Elizabeth Warren are the two that I feel like are really addressing the issues of what the African-American woman is experiencing,” said Christian Nunes, National NOW board member and chair of its Racial Justice Committee.

Nunes also considers Harris’ experience as a prosecutor a strength that could help the senator develop effective criminal justice policies on the campaign trail.

“In many ways, Black women are like the ‘average voter.’ They’re worried about housing. They’re [worried] about education. They’re worried about making a decent wage,” Grant said. “There are some things that will hit us differently, but there are some things that will be important to all voters and will be important to Black women in the same way.”

Although Black women support a broad range of issues that also impact other demographics, experts at the African American Research Collaborative said it is imperative for candidates to discuss race and how it complicates issues.

“It’s not just that [President Donald Trump] has positions that they disagree with,” said Henry Fernandez, an expert at the African American Research Collaborative. “Black women believe that Trump is dangerous and is in front of a racist movement that is even more dangerous. It is important to speak specifically to that to distinguish themselves in the Democratic primary.”

Grant anticipates generational issues will emerge among Black women more when they consider “notions of what’s possible.” The 35-year-old considers herself part of a somewhat cynical generation. “Younger Black women might be inclined to support a Kamala Harris or a Cory Booker or a Bernie Sanders, and not be willing to accept analysis that suggest that Joe Biden is the only viable candidate,” she said.

Isom, of the YWCA, said older Black women, however, believe the best bet to beat Trump is Joe Biden. “Biden sticks out the most … he’s a name and a brand that all of us know really well,” she said.

New York State Attorney Letitia James said millennials want a candidate who addresses “housing, the unemployment rate, the criminal justice system, legalizing marijuana, investing in underserved communities and communities that have been impacted by this war on drugs, and electing more women of color in offices up and down the ticket.” She added that millennials are concerned with attacks on immigrants and the media.

Democratic Rep. Robin Kelly of Illinois noted that the younger generations have told her they want more of a focus on the environment and student loans.

Alongside the push for progressive social policies, younger generations are on a mission to hold candidates accountable for their political records. During the first weeks of Harris’ campaign, the senator’s leadership as attorney general of California came under fire.

Likewise, Biden’s role in writing a contentious criminal justice bill has attracted the attention of Black Lives Matter. In 2016, the same legislation presented a challenge for Hillary Clinton as she tried to court Black voters.

“We will have major critiques of all the candidates depending on their past and their history,” Cullors said. “Joe Biden is definitely going to be someone that we’re having some of the most critiques. He’s the oldest. He’s the most senior. He was involved in developing the crime bill.”

Biden seems to attract the most criticism for the bill. However, other presidential candidates such as Democratic Sen. Bernie Sanders of Vermont and Democratic Gov. Jay Inslee of Washington voted for the legislation’s final roll call.

The Violent Crime Control and Law Enforcement Act of 1994

Biden supporters addressed his criminal justice history in a variety of ways. Some said that given the context of Black on Black crime at the time, the bill was appropriate and well-intentioned.

“A lot of the people that are focusing on that in regard to Joe Biden are losing sight in that it was a different time,” said Carol Moseley Braun, the first woman to serve as a senator from Illinois and the first African-American woman to serve in the Senate. “We were responding to what was going on in the country at the time.”

Moseley Braun said at the time of the bill’s inception, the country was in the midst of a crime wave, which followed the crack epidemic.

Five current Congressional Black Caucus members voted for the measure along with more than 20 other CBC lawmakers, including then-Chair Kweisi Mfume of Maryland. Although Black activists like Rev. Jesse Jackson opposed the legislation, Black congressmen and women carried the bill across the finish line—without their votes the final count would have likely been 209-221.

Other Biden supporters said that regardless of his position on the bill, he remains the best-suited person to take on Trump.

“I’m not advocating that this was right or just, neither does Vice President Biden, neither does [former President Barack] Obama and Attorney General Eric Holder,” said Marcia L. Dyson, activist and author of the upcoming book, Irreverent: Memoir Of A Grown Ass Woman. “No offense to the younger generation, but they are using social media for their research.”