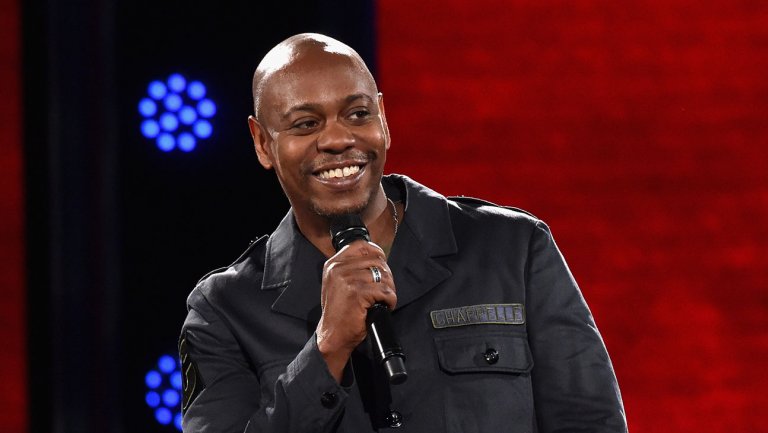 Dave Chappelle’s Sticks And Stones: It Doesn’t Matter What I Think, It’s Comedy

It feels necessary to clarify the above point, and to highlight Chappelle’s latest special is in fact a stand-up act and not a TED talk, as some members of the media and public seemingly require.

Two years on from The Bird Revelation and Equanimity, Sticks And Stones dropped on Netflix this week, and the reception has ranged from fiercely loyal appreciation to knee-jerk virtue signalling.

I’m not going to spoil any of the jokes for you myself, Netflix can do that for you in the trailers.

What I will say is, Chappelle takes on a range of topics which are no strangers to his repertoire – but his takes on the incorporation of important movements that can exist independently or as one under the LGBTQ+ banner, gun reform, #MeToo, alleged paedophilia in the music industry, and the opioid crisis, don’t flop as stale rehashes.

They are jokes relevant to society, and if we can’t laugh at everything then we really shouldn’t laugh at anything. Those are the two options available to people who genuinely believe in equality. While I don’t know about you, far too much of this tragic life is funny to me to plump for option B.

The misconception I’ve read in a few reviews are that Chappelle takes aim at demographics who are struggling for acceptance, in particular the trans community. But that’s spun on its head quite easily – it’s not taking aim in my opinion, it’s inclusion and the highlighting of struggles through a medium that is well equipped to disarm bigotry by laughing at it, not with.

Chappelle, a man who walked away from one of Comedy Central’s most successful shows, spent years in the wilderness before returning to explain that voyage while still being true to himself, is accused of ‘doubling down’ on his views as if he were presenting a manifesto to create a new world order.

Critiques that he has lost his way or ‘comic touch’ are equally misguided. Chappelle hasn’t lost potency, social attitudes have developed with venom increasing at both ends of the spectrum. It’s also easier than ever to shout your opinion into the void and pressure others to conform.

Society evolving to promote respect or tolerance of harmless individual choice is certainly not a bad thing and ought to be encouraged to keep moving in a positive direction. Society policing free speech around these topics is a different matter.

Free speech is of course the first line of defence for a bigot, but there is a big difference in free speech for comedic purposes and politically motivated hate speech crafted to resist positive change and spread ignorance.

The latter is arguably born out of fear to evolve and a desire not to be isolated. The former; the ability to recognise change and discuss the challenge of breaking down prejudice, including your own.

As we in the UK have learned from an insufferable level of Brexit chat, you don’t get people to move on an opinion by screaming ‘You’re wrong!’ or ‘I didn’t ask to be born!’ in their faces.

Should you dare to form an opinion for yourself, the special includes an epilogue which is worth sitting through the credits for.

Chappelle allows audience members to address him directly in a Q&A, while also providing anecdotes which contextualise the formation of his comedy. I found it refreshing, some may argue contrived, but what is undeniable is he’s a man open to being challenged himself, so negative reviews are likely immaterial. He understands his intent, and doing harm is not on the agenda.

Good comedians can tell bad jokes, but the appropriate response isn’t to censor or demand cancellation. It’s to not laugh.

I’ll probably watch Sticks And Stones numerous times, but I’m biased. I like to laugh.

So, watch Dave Chappelle’s latest special if you want. If he’s not your cup of tea, don’t. But avoiding for fear of being offended, or going into it closed minded that comedy ought not challenge taboo is a measure of the viewer, not the comic.