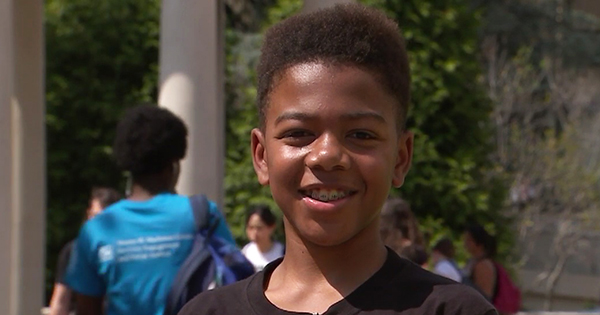 At only 14-years old, Curtis Lawrence has just started his freshman year not as a high school student, but as a freshman college student at the prestigious George Washington University in Washington, DC.

“I think when people see him, they think he’s a third-grader. When he speaks, they say OK this kid is advanced. He’s not in third grade” his mother, Malene Lawrence told WJLA.

“Only 15 out of 200 students qualify,” Lawrence, who is the youngest to enter, proudly said.

“In my university writing class, my professor asked me if I was a visitor or if I was someone’s younger brother,” Curtis said. “Most of the people that I sit at tables with. They ask me how old am I and how am I here — so I tell them everything.”

After the program, Curtis hopes to continue his education at Florida A & M to study Computer Science and Paleontology.

Corey, Curtis’ younger brother, said he wants to follow his brother’s footsteps and attend GWU as well. He dreams of being an astrophysicist one day.