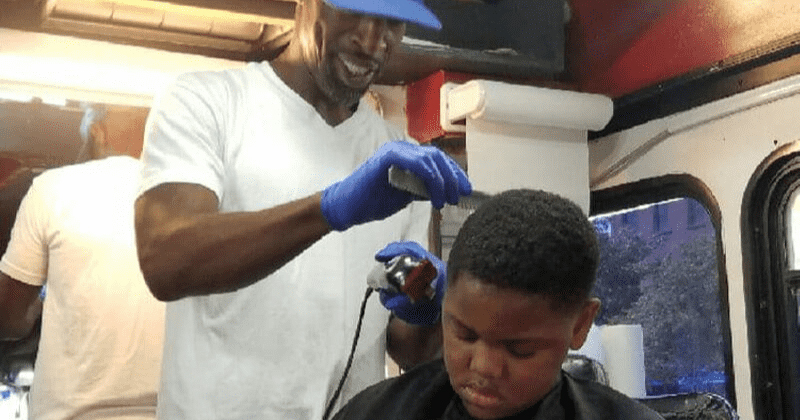 Linwood Dillard, a owner and founder of the DaBarberGodd Barbershop in Harlem New York City, is one of many business owners that have been affected by gentrification in the area. So when the rent for his storefront increased to a very unreasonable price, he was forced to get creative. He decided to buy an old bus previously used for dog grooming and launch the city’s first ever mobile barbershop.

When he was 13-years old, Linwood never imagined himself as a barber as he once ruined his own hair using a razor blade. His father then gave him a set of clippers to avoid making the same mistake again, and he began practicing on his friends.

In the mid-2000s, Linwood found it hard to find a job after getting out of his 1-year sentence in prison for selling drugs. Determined to change his life, he went back to cutting hair, this time professionally in a different barbershop after another including some in Atlanta, where he perfected his skills.

By the year 2011, he returned to New York City and started working at a barbershop in the same neighborhood where he grew up. He and a friend eventually owned the shop when the previous owner died, and they have since seen nothing but success.

But the barbershop’s hiatus did not last for long because Linwood came up with the genius idea of converting his shop into a mobile one. His newly accessorized bus now hits the road 7 days a week to cut the hair of his beloved clients.

With just $700 a month in overhead expenses, Linwood got to continue his passion in a unique way. It has become more popular as the first mobile barbershop in Harlem and has over 100 positive 5-star reviews online.

Moreover, Linwood never forgets to give back to the community that supported him. He regularly provides free haircuts to the homeless and kids going back to school.