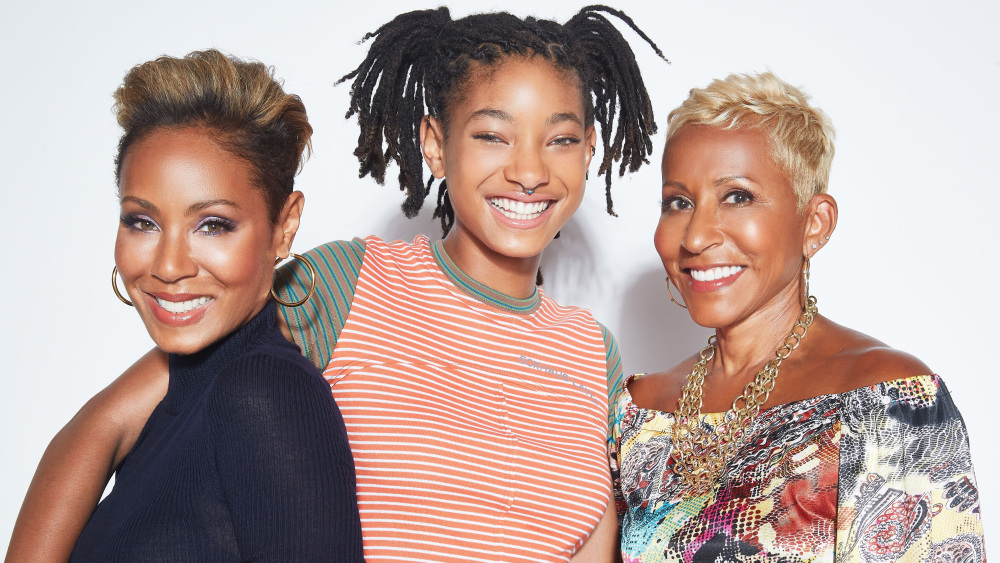 Jada Pinkett Smith’s power can be felt through the screen. When she sits down with her daughter Willow Smith and her mother Adrienne Banfield-Jones each week for Red Table Talk on Facebook Watch, they take multigenerational deep dives into issues around family, relationships, health, sexuality and beyond.

On last week’s episode, the family spoke with Demi Moore and her daughters Rumer and Tallulah Willis about public struggles with addiction that caused a significant rift in their family. While they were on the topic of vulnerability in front of their children, Pinkett Smith admitted that it took her a while before she felt comfortable enough to cry in front of Willow. In a rare and powerful moment, she apologized to Willow for withholding her feelings.

“The way that we grew up, the way my mother grew up, you feel like you have to be strong and the first thing you want to do is teach your girls how to be strong,” she said. “There was a time when [Willow’s] tears were so offensive to me, so offensive. I was like, take that over there, we can’t afford that here. Not realizing, bitch, you can afford that here. You’re not in Baltimore anymore, okay? You absolutely can afford it here.”

Though a simple act, it isn’t often that people get to witness parents asking their children for forgiveness in times where they may have failed, especially on a national platform. Moments like this are what make Red Table Talk feel so warm, almost like sage for viewers with similar experiences. That is what makes this show quietly revolutionary.

Pinkett Smith sat down with HuffPost to talk about breaking generational curses, raising eclectic Black kids and finding the courage to be vulnerable as a Black woman.

Your show has been so revolutionary for so many reasons but I’m wondering, first off, what gives you the courage to join the red table every episode with your mother, with your daughter and be so vulnerable?

I think it’s time that we as Black women know that we’re allowed our vulnerability; we’re allowed our pain. We’re allowed our healing — and definitely doing it in a generational manner is even more important to me. And then from that core, spreading it out to all women and then to all people, men included, because my focus in my life right now is healing. I’m at the beginning stages and I just wanted to create a place of safety where people could come and experience real conversations about real things and in an in-depth way.

Healing takes breaking generational curses, which is something that you all have been doing, I’m pretty sure, since before the show. And one thing that intersects with a mission of the show and the episode with Demi Moore and her family is breaking those generational curses, so I’m wondering in sitting down and speaking with her and her family what you may have learned about your own healing process?

Man, I had a deep healing moment with Willow at the table because of sitting there and experiencing watching Demi and Tallulah and Rumer working through their process and me recognizing, ‘Oh wait a minute, hold up, I owe you an apology for some of my behavior.’ And that is the power of the table. It’s just peeling back the layers so that you get revealed to yourself, it’s self-actualizing. And every day, I’m trying to grow as a person, grow as a mother, as a woman and first for myself, and then for others. And so being at the table is like a purification process. It’s just about peeling back those layers to get to those depths that get us to the information that we need in order to proceed with healing. So that we can hurt less, hurt ourselves less and hurt people that we love less. To me, that’s what it’s all about. I’m tired of hurting and I’m tired of hurting people. So for me, the red table is a process to decrease the hurt.

But that’s scary, not only looking at yourself and kind of revealing that healing part of you to those around you but you’re doing it —

And that’s so powerful for so many people because, unfortunately, a lot of people feel like they can’t. There are a lot of topics that y’all touch on that are very much taboo in a lot of households. People often don’t feel the freedom to talk about mental health, to talk about sexuality, to talk about addiction and all of these things. What is your message, specifically to Black people who are watching your show?

Here’s my message to us, specifically. It’s like, we have survived so much. We have survived so many horrors. Every day, we gotta watch Black men, Black women that … they may not be our son, they may not be our daughters, our mothers, our aunts, our uncles, our brothers and sisters specifically but they look like us. They die in the streets every day. We have horrors that we’re dealing with every day and I don’t care who you are and I don’t care what economic status you have, you can’t get away from it. So why not tread in those waters that are terrifying but are going to get you to a glory on the other end. We are treading terrifying waters every day. That is just part of the Black experience, right?

As a people, I look at us and go, ‘There’s nothing that we can’t survive.’ Specifically, we could survive some self-actualizing and some healing. We survive burying our sons and daughters when it’s way too soon. All the losses. We survived living in this country with the history we have. We’re surviving these times that we’re in. Come on, we know how to survive. That’s not the issue, it’s just being able to want something different for yourself. Believing that you deserve happiness, believing that we deserve victory in a real way.

Oooh, I just got chills. One thing, we kinda saw it with your family before, but “Red Table Talk” has really given a lens on how you raise healthy Black children, healthy children period. In this process of being on Red Table Talk and sharing this space, what have you learned not only from Willow but also about yourself in the process of being a healthy parent?

I’ve got eclectic Black children, OK. And I come from Baltimore and the last thing I thought was that I was gonna have eclectic Black children. And so I had to let go of all those defense mechanisms and all those rules that I learned on the streets of Baltimore that I survived by. I had to look at my children and see what they needed and not live in fear. But that’s a luxury and I’m clear about that. Because there are a lot of Black mothers and fathers who don’t have that luxury and they’re still in those streets of Baltimore trying to figure out how to keep their children safe. That the last thing you’re worried about is whether your son should wear black fingernail polish and dye his hair pink.

And so all the processes are very different in what our children need. It depends on what the needs are [and the reality is] that some of us are still steeped in an ignorant existence that it’s just about survival. And through art, when I look at my kids and I look at what they’re doing and how they reach kids in all different kinds of communities, you know, and how you just hope that through their expression and through their being, maybe it will spark. I know if I was still Baltimore in the streets, I would look to a young girl like Willow and just totally get on her vibe even though her reality wasn’t mine because I would want some of that power as a woman, what she’s finding as a young woman.

So, we also have to trust that there are blessings in this world for our children that if we just have a certain amount of allowance, there are gems out here for our kids even in the harshness of it. Because I know, for me, art and artists are the ones that kept me from going too far in those streets beyond and of course the higher power really was the one, ’cause I definitely put myself in some decisions and places that I can say to myself today I shouldn’t be here. But I will say my mother giving me the allowance to be gave me the freedom to find those sparks in the world I could hold onto, to give me the hopes and the dreams of doing what I am today. But there surely wasn’t any Jada Pinkett Smiths at the time I was coming up but there were those sparks out there that gave me hope for the possibility of a Jada Pinkett Smith.

So I would tell parents to leave room for that hope for your children. Even in the necessity of those parents who are in the depths of it that have to protect them, just leave that little opening for the sparks of those dreams that really kids will hold onto and that will be the thing. ’Cause if you just keep nurturing that, ’cause that’s one thing I give my mother. Through the good and the bad, through her addiction, she still nurtured my spark. How ’bout that. She nurtured my spark. So just keep nurturing that spark, if you see it in your child, don’t put it out. That’s the one thing we can do for our kids, nurture that spark.

I know a lot of Red Table Talk fans may come up to you and sing your glory, but is there anything in particular that stands out that you’re like, ‘Wow, we’re really touching people’s lives in a significant way?’

It’s beautiful. I get people who come up to me all the time from all walks of life, just telling me different experiences they’ve had watching different episodes and what it’s done for them and most of the time it’s just validation. I’ve had a lot of husbands come up to me and talk about the show that Will and I did about relationships. They’re like, ‘My wife has been telling me the same thing for years and I just wasn’t listening.’ But it took for a man to come on and him in particular to say, ‘Oh, this is where I was misstepping.’ And then they go, ‘OK, now let me look at this.’ So it just brings me joy that people are getting glimpses of their … whether it’s glimpses of validation or seeing light at the end of whatever tunnel they’re in. It’s just a little glimmer of light.

We all still have that spark.