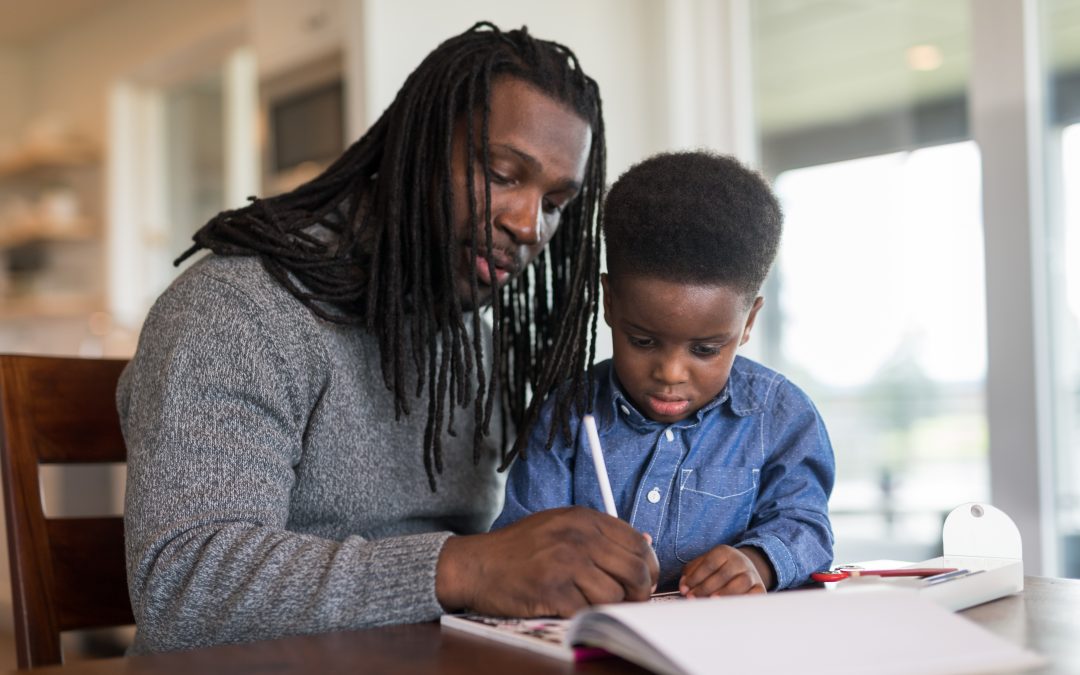 This is the consensus, right? It’s interesting that we sit back and believe that garbage. It’s time to shatter, crush, and dismantle that lie. I’m about to tell you something that may blow your mind and change everything you know about everything.

Black fathers spend as much, and in many cases, MORE time with their children than other racial groups. Yup, right here in America. It’s proven. Gasping for air yet? I did. When I first came across this study, I thought it was a joke. But I also knew it had to have some validity, because major news outlets reported it:

Children under the age 5: Black Fathers prepared and/or ate meals more with their children vs their white and Hispanic counterparts

Children 5-18: Black Fathers took children to and from activities daily more compared to their white and Hispanic counterparts

Children 5-18: Black Fathers also helped their kids with homework more than their white and Hispanic counterparts

Accepting the truth about black fathers.

Reading an article wasn’t enough and I still struggled in my confusion. I never heard this assertion and I wondered how many others missed it too. My curiosity took over, and I went straight to the Centers for Disease Control and Prevention’s (CDC) report. And there it was. I was staring at beautiful charts, graphs and data tables proving that black fathers are winning in parenthood across multiple areas. Still shaking your head? That’s fair. It was a hard notion to wrap my head around too. Look at the graph below for more proof.

According to the report, black fathers show as much, if not more involvement with their children than their white and Latino counterparts across categories:

Waaaait, what??? Come again? So basically black fathers are winning in all these categories? Well, I’ll be. This is great, because fatherhood involvement has so many positive effects imperative to our children’s well-being. Involvement increases child academic achievement. Decreases childhood delinquency. And decreases childhood substance abuse. But I’m still a bit baffled on why negative narratives about black fathers have circulated through the country and our communities for decades, despite this truth.

What we THOUGHT we knew.

Why is this report so surprising? Because it goes against everything we thought we knew. Allow me to clarify. Personally, I know many great and involved black fathers. My husband, dad, uncles, cousins and friends are testaments to that. But there is a collective ideological narrative buried deep down in ahem, our subconscious that overrides what the data proves to be true. The narrative that “black father’s ain’t nothin” rings as clear as our dark/light skin “colorism” complex, and echoes louder than our historical emotions towards breastfeeding.

This vile narrative reeks of the distrust, shame and disappointment we show towards black fathers as it resonates across mainstream America. It drowns out the conversations being had around our own dinner tables. It even overhauls Father’s Day. You know, all the reminders about how Father’s Day should really be for the mothers that struggled in their absence. The general consensus buried deep in the bowels of America is that black fathers are gone. Ghost. Aloof. Disinterested. Basically they have no desire to step up and pull their parental weight. These myths are contagious, destabilizing, and toxic. And what do we do? Sit back, accept, and add fuel to the fire of this public castration.

Why everyone got it wrong.

Many of our negative assumptions have long, complicated roots entangled in oppression. Perhaps it’s because so many of our black men are dead, absent or behind bars due to structural barriers, inequality, and institutional racism. In fact, 1.5 million black men are deemed “missing in America” because of early death and imprisonment. Yep, their black faces STAY plastered right there on the sides of 1.5M milk cartons. But let’s be clear. When they go “missing,” it’s generally not because they place a lesser value on parenting. Instead, it’s due to the aforementioned factors that strip this vulnerable population of parental engagement.

It also rings true that over the centuries, many black families have adopted a non-traditional household makeup that is confusing and unfamiliar to mainstream white America. Black household structures emerged out of collective adaptation to marginalization and oppression. For example, marriage is a disincentive for many black women on welfare because a growing household reduces their government assistance.

Long story short, for too many, marriage leads to more financial struggles as opposed to the elevated socioeconomic status of their white women counterparts. The New York Times journalist, Charles Blow, speaks of this when addressing the black household: the CDC reports that 72% of black children are born to unwed mothers. Black men and women are more likely to live together without getting married.

Myths about “shacking up.”

Now for the kicker. The data shows cohabitation does not equal absenteeism. Now turn to your neighbor and repeat that. We mistakenly equivocate “shacking up” with bad parenthood. But research shows otherwise. Furthermore, 67% of black fathers that do live apart from their children see them at least once a month, compared to 59% and 32% of white and Latino dads, respectively. In other words, black fathers, both in and out of the household, are more involved with their children than other racial groups.

America is offended by what it doesn’t understand.

Unfamiliarity and lack of understanding begets frustration and negative assumptions towards black men. You know what they say about assumptions, and this is why America is confused as all get out about the black household. If America uses marriage and traditional white family structures as a metric to extrapolate and gauge black father involvement, it will come up short every time. It doesn’t fit, it doesn’t work. America can’t force-fit black fathers into it’s box of how things should be. Otherwise, it will forever wallow in a perpetual state of misconception about how black families really parent and operate. We are different. Our family structures are different. Different doesn’t mean worse. Perhaps our way isn’t so bad? Hmmm.

Hijack the narrative and tell the truth.

Where do we go from here? I can make a few suggestions. If we don’t like the conversation, we have to change it. It’s clear we have to tell the truth about how well black father’s are parenting. But how? We need to acknowledge black fathers more. Celebrate them. Lift them up. Empower them. Now we know the truth and we can’t keep riding uninformed on this runaway train. We have the collective responsibility to dismantle, crush, and revamp the conversation until it resonates in our subconscious thinking. It’s up to us to grab the narrative and steer it back on track. When we sing this song from memory, it will emerge and embed itself in America’s lyrical psyche as well. Imagine America finding it “cool” to be like black dads!

Steps on how to change the conversation.

Believe it. Read, research and inquire. After all, this is the first step because we can’t preach what we don’t believe.

Change the conversation in your community and around your dinner table. It starts with the little things.

Celebrate, promote, and encourage fathers every day of the year. It’s motivational for everyone.

Stop the shameful public-bashing. It perpetuates the negative narrative.

Give them their Father’s Day back. Yep, hand it back over. We know moms are great and sometimes take on more than we can bare. But shine the hell out of black father’s on that day while everyone is listening. Don’t worry, I’ll remind you again in June.

We can’t wait on America to tell our truths. We gotta do the legwork ourselves.