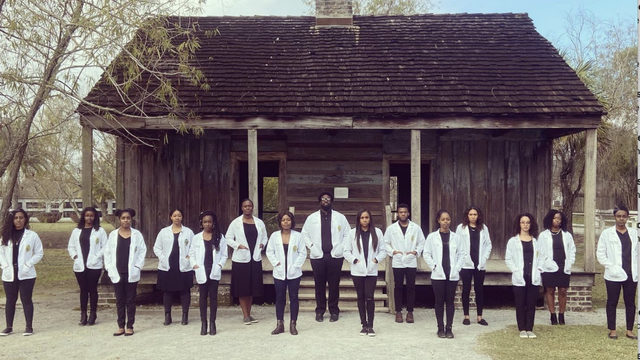 A photo of 15 black Tulane University medical students standing in front of historical slave quarters at a Louisiana plantation went viral on social media with the message: “We are our ancestors’ wildest dreams.”

The images taken by Abedoyin Johnson were posted to Twitter last week, showing the medical students standing at Whitney Plantation with their hands in the pockets of their white coats.

“In the background, an original slave quarter. In the foreground, original descendants of slaves and medical students. #whatatimetobealive#yeahwecandoboth.

The 15 students in the photo are members of the Tulane chapter of the Student National Medical Association, a student-run organization that supports black medical students.

Russell Ledet, a 33-year-old second-year medical student at Tulane, told NPR that he organized a trip to the plantation in Edgard, La., which says it’s “the only plantation museum in Louisiana with an exclusive focus on the lives of enslaved people”

“I could just imagine our ancestors in heaven looking at us and being so happy,” he said. “They’re saying, ‘Look at them. They’re doing so well. Their resiliency is shining.'”

Ledet said he never saw a minority physician growing up.

“We are aware of our position and what we mean to a whole lot of children,” he said. “A whole lot of undergrads are hoping and praying to get an interview for medical school, or even somebody to just look at their application. We’re here as living proof that it’s possible. If we can do it, anybody can do it.”

Medical school is “grueling,” but Ledet said that he can look at the photo for motivation while studying for a neurology exam.

“I hope this image will be posted in somebody’s classroom and some teacher will be able to say, ‘Every last one of those people up there is a practicing physician,’ ” he told the outlet.

Sydney Labat, another Tulane med student in the photo, told the outlet that the image represents “resiliency.”

She said the group wanted to look “determined” and “strong” in the photographs, “embodying the strength of the people who lived on those grounds.”

“If I had seen this photo when I was younger, it would have been validation that the people telling me that I couldn’t be an orthopedic surgeon — that I should have a Plan B, but they didn’t say that to my white classmates — that they can’t hinder me in any way,” Labat said.