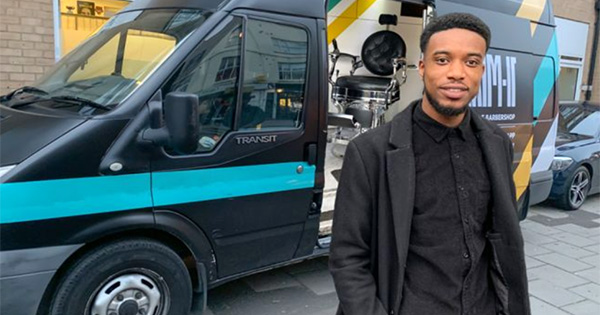 In today’s fast-paced world, most people would want convenient and quick service whether it be transportation, food, or anything so as to not waste too much time. Darren Tenkorang, a 24-year old Black entrepreneur from England, thought it would be profitable to use the same idea for male grooming. So, he co-founded Trim-It, a barber-shop-on-wheels that people can book via an app, basically like Uber!

Darren, a Ghanian native who grew up in Brixton, South London, always had a passion for male grooming. He would personally look for a barber that specializes in Afro-Carribean hair to make sure his hair would be cut well. But he did not initially imagine he would actually make money from it.

Primarily, his mother and father, who worked as a cleaner and security guard respectively, had dreams of him becoming a banker, lawyer, or accountant. He did study Business Management at Sussex and even got a one-year placement at a reinsurance firm. However, when he discovered he was dyslexic, he had to reassess his career plans.

As a child, Darren said he enjoyed going to the barbershop with his dad where he gets to socialize with other people for hours. But as he grew older, he realized the importance of time and he got sick of waiting for the barber to accommodate him. That’s when the idea of putting up a modern barber shop business came to him.

“The new generation, like me, just want a trim and to get on with their day,” Darren told BBC. “We live our life fast-paced.”

He decided to join the StartUp Sussex enterprise competition for student entrepreneurs. He proposed an idea of an app that would allow people, not just those who use Afro-Caribbean barbers, to book an appointment at a salon for a fixed time with a particular barber.

In his proposal, he also added an idea of a mobile barber shop where barbers would drive to clients in a van. The idea, which he called Trim-It app, won the competition and Darren was named the University of Sussex’s Student Entrepreneur of the Year.

He used the £10,000 prize (about $13,000 USD) and recruited fellow contender and student, Nana Darko, to make his idea into a reality. Together, they signed up barbers and built the app which was immediately swamped with bookings. They thought it was becoming successful until they came across inevitable challenges: unpunctual barbers resulted in negative customer feedback, and then they also eventually ran out of money.

Taking things to the next level

Eventually, they realized it was time to take a risk by means of the mobile barber vans. They sought financial support from family and friends. After raising a five-figure sum, they were once again ready to jump-start the business with their first van — modified into a mini-barber shop powered by an electric generator — and two full-time barbers in February 2018.

The power of word-of-mouth worked on them as a lot of men, mostly young, Black millennials and professionals, made bookings. They also worked with celebrity customers such as musicians Charlie Sloth and Sneakbo. In addition, more investors signed up with the business, allowing them to raise a six-figure sum.

Currently, there are three Trim-It vans in operation. While the relatively high cost of their haircut may not affect its success, they are still facing other obstacles including parking, traffic, climate change, and the sentimental attachment to visiting traditional barber shops. Despite that, Darren is still very much optimistic that he can modernize the barbering business.

“Mobile barbershops will be a thing, trust me,” he said.