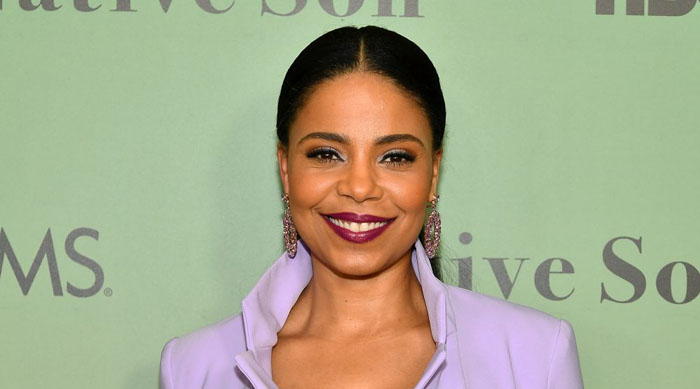 For over 20 years, Sanaa Lathan has been spectacular in every entertainment project she’s done, from the stage to TV and films. In the latest episode of DC Universe’s streaming service series ‘Harley Quinn’Season 2, Lathan is set to voice the character Catwoman.

Other actresses who have played Catwoman on the big and small screen include Julie Newmar, Lee Meriwether, Earth Kitt, Halle Berry and Anne Hathaway.

Harley Quinn is an adult animated action-comedy series premiered on November 29, 2019, on DC Universe. The series follows the misadventures of Harley Quinn (Kaley Cuoco )and her best friend and partner in crime, Poison Ivy (Lake Bell), after leaving her ex-boyfriend the Joker and attempting to make it on her own as the criminal “queenpin” of Gotham City. The series will also feature Poison Ivy, Batman and a cast of heroes and villains — old and new — from the DC universe.

Airing on April 17, episode #3 (“Trapped”) – Harley and Ivy team up with Catwoman to steal an artifact from a museum that’s been boobytrapped by none other than Dr. Trap. Meanwhile, Dr. Psycho (Tony Hale) tries to prove himself as a leader, which Riddler exploits as an opportunity to escape.

Lathan is no stranger to the animation world. She previously voiced the character Donna Tubbs on Fox’s The Cleveland Showfor four seasons as well as appear on its flagship series Family Guy (on a recurring basis). She was last seen in the final season on Showtime’s The Affair. Other TV appearances include the “Replay” episode of the The Twilight Zone on CBS All-Access and HBO’s Native Son.

Blackfilm.com recently spoke exclusively with Lathan as she talked about voicing Catwoman, coping with the coronavirus epidemic, appearing in Steven Soderbergh’s Contagion, and remembering her film, Love & Basketball, her first film as a lead.

How did the role come about for you?

Sanaa Lathan: It was literally was an offer that came to my agents and it was thrilling for me because obviously it’s Catwoman. I also just love doing animation because it’s so fun. It’s so easy. You just roll out of bed, in your sweats, and you don’t have to do hair and makeup. You just go into the booth and you’re in and out. It’s such a nice job to have. For many years, I just never really watched animation. I wasn’t really clued into the world and when I got The Cleveland Show, I binged Family Guy. I binged a bunch of Family Guy and I was like, “Oh my God! Okay, I get it.” I get now why people are into this. I’m always telling my agents, “Get me out there for these for these animation shows because I just love doing it.” You can do crazy characters and flex those muscles.

With Catwoman, I had a connection with her because when I was a toddler, my mother was in the original Timbuktu on Broadway. She was a dancer and was also in the original The Wiz on Broadway. Then after that she was in the original Timbuktu and she had a featured role as a dancer and Eartha Kitt starred in it. Eartha Kitt just loved my mother and they became friends and she took my mother under her wing. I was around her Eartha Kitt a lot growing up. I even have a painting of her in my living room. I think of her as a spiritual family member. The fact that she was such an iconic Catwoman and the fact that I get to voice Catwoman on this series is cool to me.

How would you describe Catwoman in this series and is it different from other variations of Catwoman besides the fact that is an animated series?

Sanaa Lathan: Well, it’s an animated adult series so she’s very sexy, and she’s very cool. All the girls just want to be her friend and want to be accepted by her and she’s amazing thief. She’s hot.

Why do you think Catwoman has well liked from those who have played her? Is she perceived as a villain?

Sanaa Lathan: She comes to help Harley Quinn with one of her missions so it’s almost like she’s a criminal because she’s a thief but she’s helping Harley with something. Harley is actually an anti hero too. It’s the villain that you hate to love. You love her. That outfit is banging. Her body is banging and she has all of the Kind of best things about cats. She’s sexy, she’s sensual. She’s cool. She doesn’t need anybody.

What was your first impression when you first saw the drawing and then the episode?

Sanaa Lathan: I had not seen the drawing until they started promoting it. It made me chuckle. From the side she has a little bit of a ski slope nose like me, so I don’t know if they had me in mind. I don’t know if that was a coincidence or synchronicity.

Will you be appearing again throughout the season?

Sanaa Lathan: Yes, I will be appearing again. I did maybe four or five episodes.

Was it fun getting back in the booth and doing voice work?

Sanaa Lathan: It’s the best job in the world because it’s just fun. You can really go just outside the box with your choices because it’s animation.

Since less is required for animation work as opposed to doing a feature film, how are you coping with what’s going on in the world? At what point did it get serious for you?

Sanaa Lathan: There was a period maybe three weeks ago when it was at the beginning of the hoarding. Where everybody was buying the toilet paper where you just thought, “are we are we at the end? Is it is about to get Mad Max out here?” About three weeks ago, I started to take this seriously and stay at home and do what they’re telling me. It’s very clear that to me that it doesn’t seem like they really know what you’re talking about. It’s constantly changing. So me and my family just decided to quarantine together and follow the rules.

There has been plenty of articles about the film Contagion, which you appeared in. How surreal is it that you appeared in a film that somewhat correlates to what’s happening now?

Sanaa Lathan: It is crazy and I’m a person who never really watch my own films because it’s just not enjoyable for me. I’m too self critical. I’m a Virgo. So I generally will watch a movie maybe once or twice in the beginning, the premiere and maybe once before the premiere just so I can talk about it. Then I just move on. With contagion, I literally only watched it once. Back then. I remember thinking, while it was so well made and I’m such a huge fan of Soderbergh, that it was so creepy to me. I remember thinking, “why would anybody want to go through that experience” because it was really was disturbing to me. So when people started watching it recently, I was like, “Let me see what this is about.” I saw it recently, and I could not believe how chillingly prophetic it was, down to details. It was just such a gorgeous film by him, and I was able to actually really appreciate the artistry of it. His filmmaking was just amazing.

I’m doing all the things that keep me sane in the first place in this in this industry in this world, I really believe in therapy. I’ve been in therapy for years. I’ve been talking to my therapist on a regular basis, I’ve been meditating. I went through some severe anxiety about five or six years ago, and I learned TM, transmental meditation, but I truly believe in all meditation, and I fell off my practice a little bit. You’re supposed to do to 20 minutes twice a day for this particular meditation. I’ve been really committing to that and that’s been helping with the anxiety, and then just connecting with friends and acting as if it’s going to all be solved. That’s all we can do.

Next week will be the 20th anniversary of Love and Basketball. For you, was Was that your first lead role?

Sanaa Lathan: It was my first lead role in a movie, but I had done close to 30 plays before that. I did lots of Shakespeare. I did 12th Night at Yale Rep. I did lots of Off Broadway plays. I definitely was a newbie to film in TV, but I was by no means a new actress.

Having performed in front of a large and live audience doing theater, was it ever daunting doing the movie and knowing you have to carry half the movie because you’re the co-lead?

Sanaa Lathan: Yes. It was daunting not because of the movie part. Because I had had so much experience on stage and when you are used to starring on stage doing eight shows a week you, doing a movie actually is an easier transition. But the actual basketball, the physical learning and playing and trying to pull off the basketball authentically and wanting so badly for it to be right, that was the hugely challenging part for me.

It was cool because my character Monica says she wanted to be the first girl in the NBA and when Gina was writing that there was no WNBA. They got a coach from the WNBA to help coach me for the basketball scenes, which was so cool.

What do you make of the fact that the film is still well loved 20 years later?

What did the film do you as an actress? Did you get more roles?

Sanaa Lathan: Some people have overnight instant stardom. I never had that. I had a very blessed slow build. It was frustrating at times early on. I want what that actress has or why don’t I have the overnight success and I’m still doing movies. There would be periods where I didn’t work for a year in between those roles but it was great in hindsight because it taught me faith. I had to work on myself and my craft in between. Now I have a production company and I’m developing things and I’m grateful.