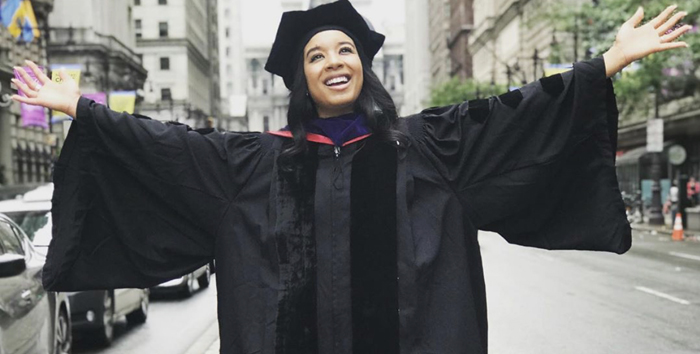 Ashley Williams has mastered the art of practicing Black girl magic, and the proof is not only in her master’s but her law degree that she earned the exact same week. Before you ask — no, she wasn’t enrolled in a dual program, she actually attended two different universities located in two states at the same time.

In 2019, Williams earned a master’s degree in political management from George Washington University in Washington, D.C., just two days later received her JD from the University of Pennsylvania, according to Because of Them We Can.

To add to the abundance of Black girl magic, Williams completed her master’s while she was working as a special advisor and director of special projects to the U.S. Ambassador-at-Large for Global Women’s Issues.

“I was really interested in beginning a program that would allow me to build upon my undergraduate degree, love for politics, and allow me to continue working. I knew I needed to grow. The Political Management degree at GW was perfect,“ Williams told Because of Them We Can.

The online program allowed Williams the flexibility she needed to maintain her work schedule while simultaneously furthering her education, but that alone didn’t fulfill her career dreams entirely.

“That fall I also applied to law school, which had been a part of my plan since high school. Both of my parents are lawyers, and I admired them and wanted to follow in their footsteps,” she said.

Just one year into her master’s program, and after many cycles of law school rejections, Williams was finally accepted into UPenn’s JD program.

“I faced rejections from schools during two separate admissions cycles—once while I was working at the White House and once while I was at the State Department—but I was determined to go,” she said.

Williams’ accomplishments didn’t come easy, and she had to be strategic about during her journey.

Williams hopes that her journey will encourage others to be ambitious and continue to dream big no matter the setbacks.

“No matter what, never give up and never feel like you aren’t enough. I hope my story inspires others to keep striving and remember that all of our possibilities are endless,” she said.