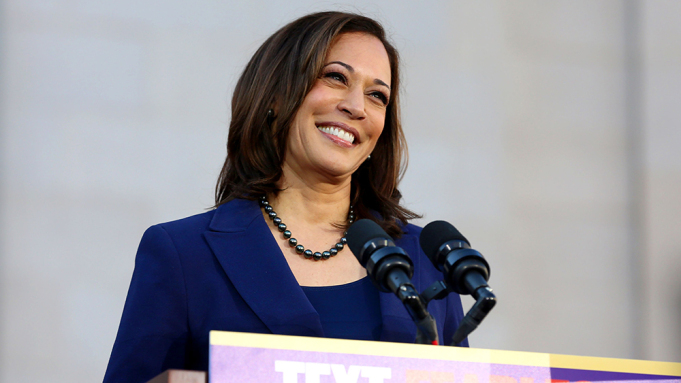 By CHRISTOPHER CADELAGO and NATASHA KORECKI,

Kamala Harris was written off as a possible vice presidential pick for Joe Biden last year after a cutting debate performance where she seemed to suggest he was racially insensitive.

Now, Harris is not only in top contention, but Biden aides, surrogates and major donors see her as the best fit at the onset of the process — at least on paper — to join him atop the Democratic ticket.

Biden’s campaign has formally started vetting a group of prospects that includes roughly a dozen women. But in interviews, more than two dozen Democrats, including advisers, allies and donors aligned with Biden, returned to Harris as an early frontrunner. Sen. Elizabeth Warren of Massachusetts, the favorite among progressives, was also seen as rising above the pack.

Biden and his family were stung by the June debate exchange over his record on school busing. The attack was particularly hurtful because of Harris’ bond with Biden’s late son Beau, also a one-time state attorney general.

But Biden and others close to him have come to view Harris’ debate knockdown as part of the rough and tumble of presidential campaigning.

Even before Harris ended her own campaign last year, aides said she and Biden were already stealing warm moments together. And friends of former second lady Jill Biden — who as recently as March described Harris’ attack as a “punch to the gut” — said they’ve mulled ways for her to telegraph that it wasn’t a deal breaker for the California senator’s chances, perhaps by sharing her posts on social media.

“I believe strongly that people make mistakes when they allow the heat of a political campaign and things said during a contest to define you,” Rep. Jim Clyburn (D-S.C.) told POLITICO. “We’re at a point now where whoever was part of the scrimmage needs to be on the same team. And I think they are.

“Joe Biden is a big boy,” Clyburn added. “I’ve never seen Joe have any animus toward Kamala for what may have been said during the campaign.”

Biden and Harris have spoken privately several times, and a growing contingent of operatives inside and around the presumptive Democratic nominee’s campaign have been making it clear they want her as his pick. Influential donors are joining in the push, seeing the daughter of immigrants from India and Jamaica as the most logical choice to balance a ticket led by a white man in his late 70s. Some of the party’s biggest benefactors, including those who went months rarely hearing from Harris, said they have seen an uptick in contacts from her and people on her behalf.

“She really is a standout in terms of keeping [Democrats] together and keeping donors warm,” a Biden bundler said of Harris’ operation. “She doesn’t need to do a full-court press, and it would probably be seen as unseemly for her.”

Harris, 55, has adopted a less-is-more approach to the veepstakes. She appeared at fundraisers and a town hall for Biden in late April. While she waited until after Super Tuesday to endorse him, her announcement of support in Michigan, timed to coincide with Cory Booker’s, served to act as a power boost at a time when the Biden campaign was looking to close out its lead against Bernie Sanders. Michigan was viewed as pivotal to Sanders’ campaign remaining viable at that point.

Harris has since started to issue other endorsements of her own and raised money for other Democrats running in contested elections.

“Clearly, she is out there and being supportive of Joe, but she is coming at it from a position of strength,” the donor added. “She has continued to prove herself as a team player for Joe, a team player for Senate Democrats and that’s going to benefit her regardless of whether she’s picked for VP.”

Warren’s supporters are pitching her inside Biden’s camp as a governing choice who could unite the party by exciting liberals and younger voters while bringing to bear her skills as a small-dollar fundraiser. Harris’ allies and donors point to her comparative youth, her ability to energize voters of color in key states and what they believe would be a seamless rapport between her and Biden, with little ideological daylight.

“I would be disappointed if Kamala Harris isn’t chosen. She deserves to be chosen,” said Bakari Sellers, a South Carolina Democrat and a top surrogate for Harris on her campaign. Inside Biden’s operation, Sellers said, “a lot of people are pushing for her. She has a lot of support.”

Clyburn’s endorsement before the South Carolina primary was a turning point for Biden’s campaign, coming after Biden failed to win any of the three other early state primaries. He said he has his opinions on the VP matter, but that ultimately Biden has to feel comfortable with his choice.

“I’ve made very clear that when I look in the mirror in the morning, I realize who and what I am. I have three daughters, two granddaughters and I am very supportive of an African American woman on the ticket. I’m very supportive of that,” he said. “But I also know that in order for there to be a winning ticket, the chemistry has to be there.”

Asked whether Biden risks alienating African American voters — or failing to excite them to go to the polls — by not choosing a black woman as a running mate, Clyburn bristled.

Harris has worked to move past the PR missteps and staff drama that surrounded her own campaign, keeping a tight lid on her return to the trail and March endorsement of Biden.

She overhauled her political team and is now working closely with Mindy Myers, the veteran Democratic strategist; Sabrina Singh, a senior adviser who previously was a spokeswoman for the Democratic National Committee before joining the presidential campaigns of Booker and Mike Bloomberg; and Rohini Kosoglu, a former Harris chief of staff who later worked on her presidential campaign. Julie Chávez Rodríguez, a national political director on the Harris campaign, and Jalisa Washington-Price, the South Carolina state director, are also advising Harris.

Harris’ post-campaign emergence has mostly centered on her legislative efforts, including a heavy focus on dealing with the coronavirus. She’s pushing for a task force to address racial disparities in the number of cases and deaths, and working on a separate effort to ensure all communities have access to testing and treatment. With Sens. Bernie Sanders (I-Vt.) and Ed Markey (D-Mass.), Harris introduced a bill to send a monthly $2,000 check to people who make less than $120,000. Another Harris effort with Rep. Ayanna Pressley (D-Mass.) is focused on helping small businesses.

Before the debate in Miami, Biden and Harris got to know each other through Beau Biden, who died of brain cancer in 2015 at age 46. The following year, Biden, along with President Barack Obama, endorsed Harris for Senate over another Democrat ahead of the party’s national convention.

After Biden swore her in to the Senate early the next year, Harris suggested they get together for regular coffees. The meetings didn’t happen, but there were seemingly chance encounters on the street and at train stations that staffers captured for social media, fueling speculation from supporters about their possible future together. The first debate tested their connection, and soured Harris among some key Biden advisers and top donors.

Biden in interviews offered explanations for why he was caught so flat-footed. He said he was prepared for questions about his record, but not in the way Harris did. “She knew Beau. She knows me,” he told CNN last summer.

“It was personal to her, because of Kamala and Beau’s relationship. She was caught off guard, they both were,” one Biden adviser said of Jill Biden’s reaction. The adviser stressed, however, that Jill Biden has since put it behind her and pointed to the virtual town hall with Biden as one example that the campaign has publicly brought Harris into the fold.

People close to Harris said they’ve never heard her express regrets about questioning Biden’s position on busing, which he provided an opening for ahead of the debate by talking about his past work with segregationist colleagues.

Sellers, whom Harris will join next week for a talk about his upcoming book, suggested that the aggressiveness with which she questioned Biden would actually be an asset on the ticket.

“What I would take from that for choosing a vice president is she’s a really skilled debater,” he said, “and she’d kick Mike Pence’s ass.”