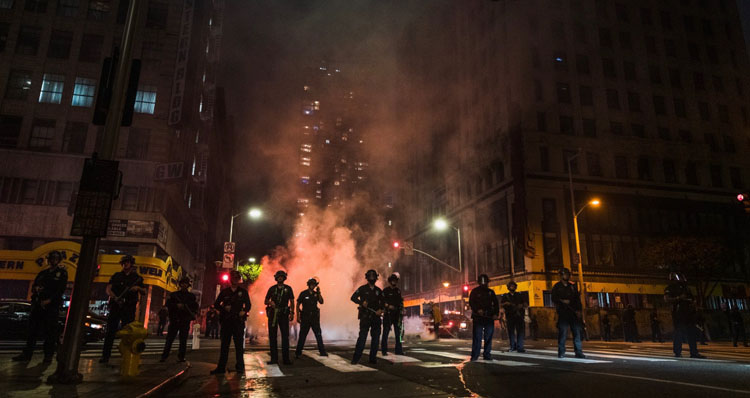 This Is a Neo Nazi Riot Folks

So for those of you who are interested – I have no idea how national media is covering this – here is what is happening on the ground from my perspective. It is a long post.

All day yesterday people were out on the street helping businesses – EVERY SINGLE BUSINESS IN UPTOWN has boarded up windows and locked down their stores. The 3rd Precinct, which burned on down Thursday night, is on the east end of Lake Street. Uptown, where we live and the 5th Precinct police station is located, is three miles west on lake street. All of Lake Street was looted on Thursday night. On Friday EVERY BUSINESS on Lake Street and adjoining commercial districts, was boarded up.

Many spray painted murals on the plywood – let folks know they were a local or minority owned business. Essential businesses.

Last night was by far the worst night. Protests during the day were peaceful. There was an 8:00pm curfew. Everything changed when the sun went down. There are roving and highly organized bands of anti-government neo-nazi white men cruising the city, breaking off plywood, looting stores, and then setting them fire to the buildings.

On the Northside, which is predominately African American, the situation was much the same. Local civic groups were trying to protect local businesses and homes. there were many fires.

The violence and destruction is NOT being driven by local people. The cars on the streets have either removed their license plates, or have out of state plates.

Here is a post from a neighbor, “Everybody! We need to get our heads around what’s happening, Mpls and St Paul are being attacked by fascist “accelerationist” white crazies. Trying to divide & destroy us.

Expect these same types to infiltrate all of the legitimate protests happening in other cities in America. We are fighting an enemy within.

These “accelerationists” burned down the 5th Police Precinct, our post office, every pharmacy. The Wallgreens and CVS within a few blocks of our house are still burning this morning. The grocery stores were all hit. Every bank has been hit. Every liquor store, every gas station. They have guns and accelerants.

When National Guard show up, they disappear into the neighborhoods and have been setting fires. It is a violent game of arsonist wake-a-mole. There is no longer any fire fighting service available – overwhelmed. So neighbors are using garden hoses to put out the fires and save homes. Pictures neighbors are sharing – these are young white men, heavily armed.

According to authorities there are over 10,000 of these “accelerationists” in the city. St. Paul arrested over 50 people last night. ALL OF THEM were from out of state. The authorities are checking phones of the people they have arrested, doing contact tracing of sorts on these people. These people are connected to right wing militia style groups with a civil/race war fantasy. They are opportunistically using the legitimate, peaceful George Floyd protests as a cover to actualize their neo-nazi fever dream.

Gov. Walz just said, “If you know where these people are sleeping today, let us know and we will execute warrants. Allie and I were helping the owner of a commercial building up the street – a friend, and two of these guys came up to us. Wanted to know where the free food was being distributed. He gave them an address that was three blocks away. Had no idea what we were talking about – not from here.

Allie, the girls and I are fine and safe. Exhausted. Angry. We have not really slept in three days. Everyone in Minneapolis/St. Paul is the same.

So, what to do? Our neighborhood group is meeting at the park this afternoon. I think that they will organize our neighborhood watch to patrol, try to spot fires and get them out ASAP.

Major protests are planned for today. They want the other three police officers involved in George Floyd’s murder arrested, they want the MN Attorney General, not the Hennepin County Attorney to manage the case. They want the MPD disbanded and reformed with many alternative public safety and law enforcement strategies used. But the legitimate protests will end at 8:00 pm.

The Gov. and the mayor are calling in thousands more National Guard Troops. We already had more National Guard troops in the city than ever before. They are doing a good job but were overwhelmed last night by sheer numbers. Gov. Walz is the highest ranking soldier to have ever served in Congress and led the National Guard – he clearly sees this for what it is and will fight it. This is now a military operation by the State of Minnesota against alt-right, white nationalists  and anarchists that have come into Minneapolis to use the protests against police brutality as cover for their death fantasy.

They are trying to force authorities to use deadly force and “accelerate” the violence.

It is dark friends.

The other side – this morning the neighborhood is out in force helping with the clean up, re-securing businesses. Massive food distribution at community centers. People taking in neighbors whose homes were destroyed or whose neighborhood was so impacted that it is no longer habitable. Allie was ion contact with students, many of whom are refugees from war torn countries, that were hearing explosions and fire and sirens – they were calling her to make sure she was okay.

Today I will garden. My flowers are starting to really come into bloom. Vegetables coming in strong. New raised bed being built. Eat some good food. Feel grateful. Train our new puppy Ruth, who is just a pip. Take her to the lake and give her a swimming lesson. Then I’ll take a nap. I think tonight will be a long one.