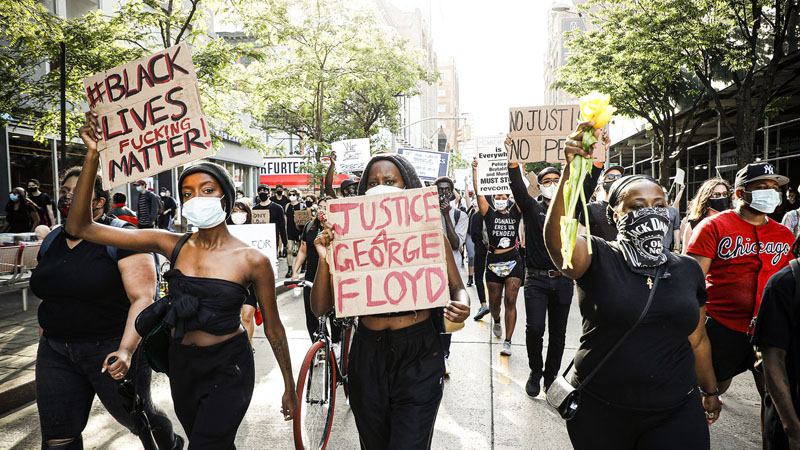 I just witnessed the lynching of a black man, but don’t worry Ted, I’ll have those deliverables to you end of day.

We’re tired, angry, confused and yet, this space is familiar to us. This place of torment and trauma has become a home of sorts. The cycle begins in the far corners of Twitter with rumblings of a killing. Then a recording of the victim’s last moments pop up and shortly after, we finally learn the person’s name.

A new name to add to a growing list no one wants to be part of.

Sparks of outrage, disgust and bewilderment soon follow. Maybe a protest happens, and in the case of Floyd, uprisings. Men and women ballooned with righteous anger take to the streets to make their presence known; to scorch earth and shout from the pits of their belly to the top of their lungs that their lives matter. Whether the powers that be hear or acknowledge their chants is one thing, but it’s the community formed by the injustice of another black death that acts as a temporary solve.

And while some of us take to the streets, the rest of us have to hide these shared feelings behind professionalism.

I don’t know who decided that being professional was loosely defined as being divorced of total humanity, but whoever did they’ve aided, unintentionally maybe, in a unique form of suffocation.

If I am to perform my duties for 40 hours a week, it’s asinine to assume that the life I live outside of those 40 hours won’t rear its head. Whether I’m a sleep deprived single mother of two or a struggling college student who really needs this internship to graduate, the belief that only the part of me that fattens your bottom line is allowed in the workplace, is stifling.

This is magnified for young black professionals who are recruited for their culture, but told, in so many words, that their blackness and the struggles that come with it are to be left at the door.

A black man went for a run only to be ambushed by two white men, shot and then killed. A black female essential worker was asleep inside her home when police serving a “no-knock” warrant shot her eight times. A white woman, enraged that a black man asked her to follow the park rules lied to cops about being threatened. And a black man died face down on the ground because a white cop suffocated him.

But yeah, I can totally have that presentation for you by end of day, Ted. No problem.

Your black employees are exhausted.

Your black employees are scared.

Your black employees are crying in between meetings.

Your black employees have mentally checked out.

Your black employees are putting on a performance.

Forgive us if our work isn’t up to par, we just saw a lynching. Pardon us if we’re quiet in the Zoom meetings, we’re wondering if we’ll be the next hashtag. Spare some grace if we’re not at the company happy hour, because the hour of joy that most adults look forward to has been stolen from us due to the recent string of black death.

We’re biting our tongues, swallowing our rage and fighting back tears to remain professional because expressing that hurt caused by witnessing black death is considered more unprofessional, than black men and women actually being killed.

So if you can, please, be mindful. Your black employees are dealing with a lot.