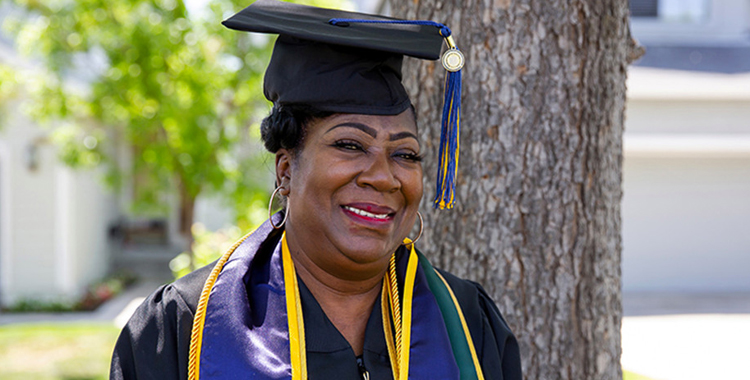 A great-grandma’s upcoming college graduation proves there’s no age limit on overcoming a lifetime of challenges.

“It’s never too late to achieve your aspirations in life,” says San Francisco’s Jules Patrice Means, 67, who will graduate from the University of California, Berkeley, this summer with a near-perfect record of all A’s and one B, reports Berkeley News.

“I will walk across the stage with the utmost grace and feeling that I accomplished my goals at one of the most prestigious universities in the world,” she says of achieving her dream. Unfortunately, the school had to reschedule the original May 16 ceremony over coronavirus concerns.

Still, Means, who is described as “down to earth” by her fellow students, will receive her degree in sociology to go along with her whopping five associates degrees that she earned in 2017 at her previous college.

And the scholarly senior’s not done yet. Means plans to apply for a degree in social welfare at UC Berkeley’s grad school and eventually work as a counselor to help low-income earners from minority communities.

It’s been a long and tumultuous road for the graduating granny. Growing up in the 1950s and ’60s in San Francisco’s Richmond district, Means had to endure horrific racism from her classmates, who reportedly called her every slur in the book.

And if that wasn’t difficult enough, Means became a single mom at 17, which she thought would dash her dreams of ever pursuing higher education.

Despite being a straight-A student, “I felt my life was going to be terrible, that I’d be on welfare and not able to take care of the baby,” says Means of her tumultuous youth. However, the tenacious teen persevered and graduated from high school in 1971, the same year that her son was born.

Years later, she suffered back-to-to strokes in 2010 and 2014, which affected the whole left side of her body. But that didn’t stop the then mother of four from attending the local community colleges, where she earned straight A’s and degrees in psychology, behavioral science, social science, administration of justice, and arts and humanities.

Her appetite for learning not yet satisfied, Means successfully applied to UC Berkeley, which she described as “like being accepted to heaven.”

The super senior’s impressive résumé has earned her the respect of her much younger peers, who describe her as having a “motherly vibe to her.”

“Ms. Jules is the mom, grandma, auntie or that one lady from your childhood who you could always count on,” Tomie Lenear Jr., program coordinator at Berkeley’s Student Parent Center, tells Berkeley News. She adds that “she’s outlived most of our life circumstances, so the times when we’re troubled are hindsight to her.”

However, Means, who is known as Ms. Jules to her classmates and even teachers, doesn’t suffer fools, either. Fellow student Avalon Ansara recounted one time when the no-nonsense granny advised her, “boyfriends are nice, but grades can lead you to a better place.”

“Education is the key to unlocking the doors that prevent people from reaching their goals,” says Means. “If I can do it, they can, too.”