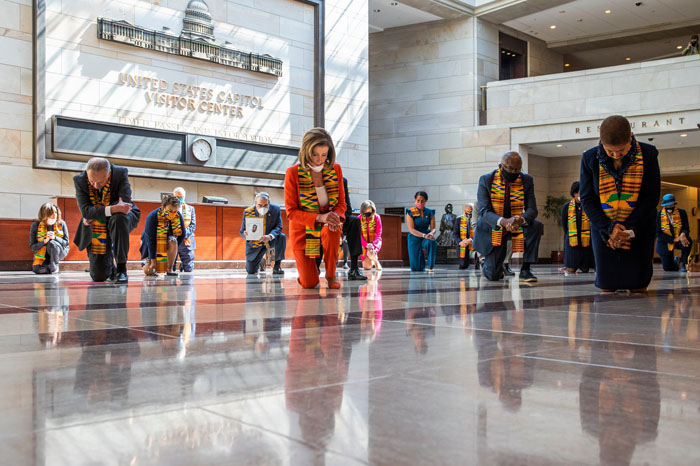 There are images of police officers joining protesters in dancing the Cupid shuffle, taking knees and hugging little girls.

There have been images of members of Congress donning kente cloth stoles, Joe Biden taking a knee and Mitt Romney marching with protesters.

There have been images of a rainbow of races and ethnicities marching through streets with Black Lives Matter posters held high, of them kneeling in moments of silence, of defaced and beheaded statues.

All of these are feel-good gestures that cost nothing and shift no power. They create no justice and provide no equity.

The Democrats in the House and Republicans in the Senate are pondering separate legislative reactions. It is not yet clear if Donald Trump would agree to any of the provisions.

The Democrats’ bill predictably goes further than the Republican’s plan, but both primarily focus narrowly on police training, accountability, record keeping and punishment.

But, these bills, if they pass as conceived, would basically punish the system’s soldiers without altering the system itself. These bills would make the officers the fall guy for their bad behavior while doing little to condemn or even address the savagery and voraciousness of the system that required their service.

This country has established a system of supreme inequity, with racial inequity being a primary form, and used the police to protect the wealth that the system generated for some and to control the outrages and outbursts of those opposed to it and oppressed by it.

It has used the police to make the hostile tranquil, to erase and remove from free society those who expressed sickness coming from a society which poisoned them with persecutions.

This society creates conditions in which extreme, concentrated poverty can exist and then punishes those who react negatively to being condemned to that poverty.

This society doesn’t sufficiently care for and insure people, guaranteeing that every person, regardless of station or wealth, has equal access to health care, and then it punishes those who suffer from stress, depression and violent fits of rage because of it.

This society systematically cloisters power — economic, political and cultural — in the hands of an elite few, almost all white, and then bemoans the apathy of those from whom power is withheld.

Even if either of the police reform bills were passed and signed into law, they would cost the nation nothing and would leave the power structure untouched.

In Martin Luther King’s 1967 book “Where Do We Go From Here,”he wrote:

“The practical cost of change for the nation up to this point has been cheap. The limited reforms have been obtained at bargain rates. There are no expenses, and no taxes are required, for Negroes to share lunch counters, libraries, parks, hotels and other facilities with whites.”

What he was seeking, what we were seeking, at that point — quality education, decent, good-paying jobs, fair housing — would actually cost the nation something. That is what real justice looks like: equal access to possibility, success and safety.

In this fight, our sights must be set high, our demands comprehensive. There is no glory in aiming small, in meekly pleading before power, to accepting crumbs on the floor when the bread is on the table.

If we are serious about battling racial injustice in the public square and not just on the police squad, we need nothing short of a new civil rights act, the Civil Rights Act of 2020.

At this point, politicians are still playing safe, being risk-averse while calling it radical.

They want the appearance of substantial action while leaving the substance of society untouched. They want to appear responsive without taking full responsibility.

But no one wants to talk about that, let alone deal with it, because to truly tackle these issues would deal in some way with wealth redistribution, and the mere mention of that concept throws the comfortable and the rich into a tizzy.

So, we’ll ban some chokeholds. We’ll collect some new records and disclose others. We’ll put constraints on officers, requiring more training and exposing them to litigation.

But just remember: These are not necessarily rogue officers. They are instruments of the system and manifestations of society.