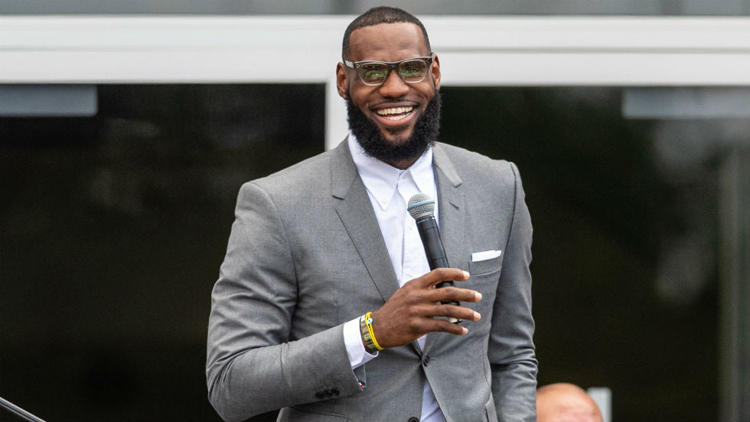 It is fair to say LeBron James is launching one of the most important athlete political campaigns in history. As Georgia’s primary elections this week turned into a voting meltdown, it’s become even more apparent one of the biggest unknowns heading into Election Day is if U.S. citizens will actually be able to vote. Those who are unable to vote cannot enact change at the ballot box, destroying our democracy.

James is forming a voting rights organization along with several other prominent Black athletes and entertainers. The group, called More Than a Vote, will go beyond traditional get-out-the-vote campaigns. It will combat voter suppression, with James using his gigantic presence on social media to shed light on attempts to restrict voting access for minorities.

“Because of everything that’s going on, people are finally starting to listen to us — we feel like we’re finally getting a foot in the door,” James told the New York Timesin an interview. “How long is up to us. We don’t know. But we feel like we’re getting some ears and some attention, and this is the time for us to finally make a difference.”

James and his longtime business partner, Maverick Carter, are putting up the initial funding for the group. Multiple former and current pro basketball players, including Trae Young, Draymond Green, Jalen Rose and WNBA guard Skylar Diggins-Smith, are involved with the project. Comedian Kevin Hart and Saints running back Alvin Kamara have reportedly committed to the group as well.

With a nation outraged over the killing of George Floyd and police violence against Black people, athletes are filling the leadership void. They are also being rewarded for their activism, with Converse signing Washington Mystics guard Natasha Cloud to a lucrative endorsement contract because of her outspokenness. Cloud, who is openly gay, published a poignant essay about white complicity in systemic racism, titled “Your Silence is a Knee on My Neck.”

The unprecedented support of the Black Lives Matter movement is apparent across the sports world, with NFL commissioner Roger Goodell even releasing a video last week encouraging players to peacefully protest, and apologizing for the league’s previous stance. It’s now smart business to embrace activism.

With that in mind, James’ efforts against voter suppression promise to be widely broadcast. But the truth is, James has enough reach on his own to make a tangible difference in public awareness. The three-time champion and four-time MVP boasts more than 136 million followers across his Twitter, Instagram and Facebook feeds. To put that in perspective, 137 million people voted in the 2016 presidential election, the NYT points out.

One of the big takeaways from the nationwide protests over the last two weeks is how effective unrelenting pressure campaigns can be. Los Angeles mayor Eric Garcetti and New York City mayor Bill De Blasio have both pledged to reduce the budgets of their police forces, which could potentially reallocate hundreds of millions of dollars to social programs. The Minneapolis City Council has pledged to dismantle its troubled police force in the aftermath of Floyd’s death.

The movement has even broken through the thick walls of Congress, where House Democrats unveiled sweeping police reform legislation. Republicans on Capital Hill have said they will lay out their own legislation to enact police reform.

With one of the largest platforms in the country, James can mobilize the masses to pressure lawmakers to stop suppressing the voting rights of minorities. Georgia voters waited in hours-long lines Tuesday across Atlanta, where new state-ordered voting machines were malfunctioning and not working properly. Polling places were closed as well, due to the coronavirus. Residents who requested absentee ballots said they waited months for them to arrive, and sometimes they never came at all.

Former Democratic gubernatorial candidate Stacey Abrams, who narrowly lost the state’s 2018 gubernatorial race to Brian Kemp amidst widespread accusations of voter suppression, says her absentee ballot was sent to her with a sealed return envelope. She couldn’t send it back.

With demands for absentee ballots surging, states are scrambling to respond. Results have still been counted well past election night in many places, including important swing states like Georgia, Ohio and Pennsylvania.

It’s apparent the White House will continue to use its bully pulpit to rail against mail-in voting, despite President Donald Trump voting by mail himself. In March, Trump explained his opposition to mail-in voting, saying Republicans would “never” be elected again if voting access were dramatically increased.

Trump’s powerful propaganda machine promises to be pushing conspiracies about mail-in voting up until Election Day, sowing doubt into our entire system. James is one of the few individuals with the reach to counteract the flood of untruths.

The results of the presidential election won’t be known until November. But whoever wins the information war surrounding voting rights will have an undoubted advantage. James is using his platform to try and ensure truth prevails.