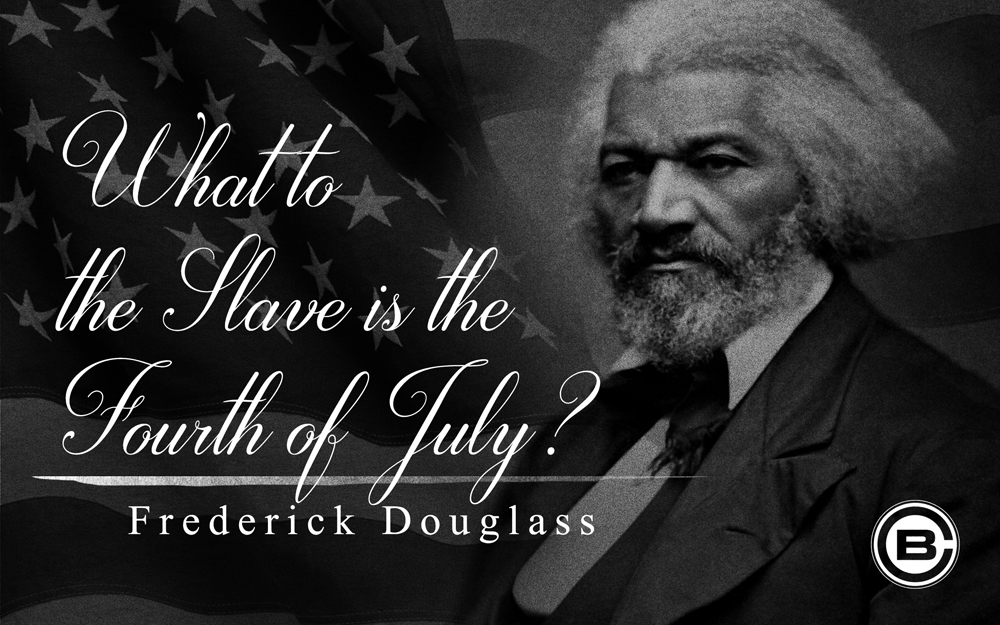 On July 5, 1852, Frederick Douglass gave a keynote address at an Independence Day celebration and asked, “What to the Slave is the Fourth of July?” Douglass was a powerful orator, often traveling six months out of the year to give lectures on abolition. His speech was delivered at an event commemorating the signing of the Declaration of Independence, held at Corinthian Hall in Rochester, New York. It was a scathing speech in which Douglass stated, “This Fourth of July is yours, not mine, You may rejoice, I must mourn.”

In his speech, Douglass acknowledged the Founding Fathers of America, the architects of the Declaration of Independence, for their commitment to “life, liberty and the pursuit of happiness”:

“Fellow Citizens, I am not wanting in respect for the fathers of this republic. The signers of the Declaration of Independence were brave men. They were great men, too, great enough to give frame to a great age. It does not often happen to a nation to raise, at one time, such a number of truly great men. The point from which I am compelled to view them is not, certainly, the most favorable; and yet I cannot contemplate their great deeds with less than admiration. They were statesmen, patriots and heroes, and for the good they did, and the principles they contended for, I will unite with you to honor their memory….

Douglass states that the nation’s founders are great men for their ideals for freedom, but in doing so he brings awareness to the hypocrisy of their ideals with the existence of slavery on American soil. Douglass continues to interrogate the meaning of the Declaration of Independence, to enslaved African Americans experiencing grave inequality and injustice:

“…Fellow-citizens, pardon me, allow me to ask, why am I called upon to speak here to-day? What have I, or those I represent, to do with your national independence? Are the great principles of political freedom and of natural justice, embodied in that Declaration of Independence, extended to us? and am I, therefore, called upon to bring our humble offering to the national altar, and to confess the benefits and express devout gratitude for the blessings resulting from your independence to us?”

I say it with a sad sense of the disparity between us. I am not included within the pale of glorious anniversary! Your high independence only reveals the immeasurable distance between us.

FREDERICK DOUGLASS
“What to the Slave is the Fourth of July?”

“…Would to God, both for your sakes and ours, that an affirmative answer could be truthfully returned to these questions! Then would my task be light, and my burden easy and delightful. For who is there so cold, that a nation’s sympathy could not warm him? Who so obdurate and dead to the claims of gratitude, that would not thankfully acknowledge such priceless benefits? Who so stolid and selfish, that would not give his voice to swell the hallelujahs of a nation’s jubilee, when the chains of servitude had been torn from his limbs? I am not that man. In a case like that, the dumb might eloquently speak, and the ‘lame man leap as an hart.’

But such is not the state of the case. I say it with a sad sense of the disparity between us. I am not included within the pale of glorious anniversary! Your high independence only reveals the immeasurable distance between us. The blessings in which you, this day, rejoice, are not enjoyed in common. The rich inheritance of justice, liberty, prosperity and independence, bequeathed by your fathers, is shared by you, not by me. The sunlight that brought light and healing to you, has brought stripes and death to me. This Fourth July is yours, not mine. You may rejoice, I must mourn…”

This speech given by Frederick Douglass would be remembered as on of his most poignant. Read the speech in full on PBS.