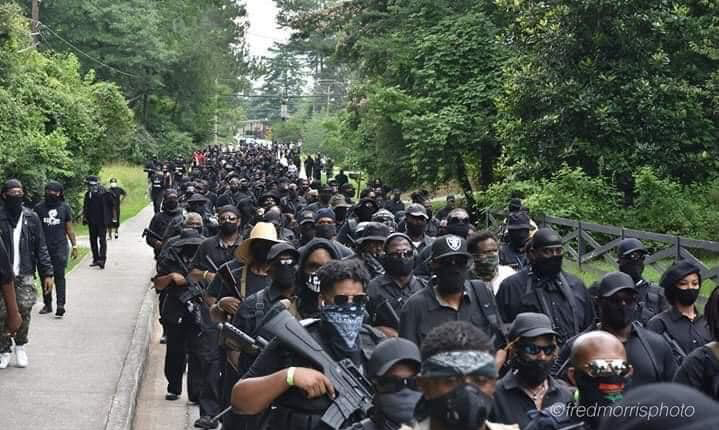 On Independence Day, heavily armed Black men and women from the Not Fucking Around Coalition, or NFAC, marched through Georgia’s Stone Mountain Park. They’re calling for the removal of a giant Confederate rock carving of late Confederate President Jefferson Davis, and Southern generals Robert E. Lee and Stonewall Jackson.

Video footage of the demonstration made rounds on social media Saturday (July 4). Clips show militia members, dressed in all black, equipped with rifles and military-type artillery.

Over time, Stone Mountain Park has become a rally site for white nationalists and Ku Klux Klanmembers. In 1915, the KKK assembled and burned crosses at the park as part of their rebirth.

NFAC Founder Grand Master Jay says that the group is not affiliated with the Black Lives Matterorganization, but that they are a Black militia. He commends the Stone Mountain police for escorting them as they exercised their constitutional right to carry.

“Our initial goal was to have a formation of our militia in Stone Mountain to send a message that as long as you’re abolishing all these statues across the country, what about this one?” he told Newsweek on Sunday (July 5).

Since the Memorial Day police killing of George Floyd in Minnesota, protests against police brutality and systemic racism have taken place across the globe. In some instances, emblems of America’s Confederate past have either been forcibly removed or taken out by the government.

According to Stone Mountain Memorial Association spokesperson John Bankhead, the NFAC was peaceful and orderly.

“It’s a public park, a state park,” he told WXIA-TV. “We have these protests on both sides of the issue from time to time. We respect people’s First Amendment rights. We understand the sensitivities of the issue here at the park…so we respect that and allow them to come in as long as it’s peaceful, which it has been.”

Stone Mountain Park reopened this weekend. The sculpture that the NFAC is calling to be removed sits nine stories high and is the largest monument in the country dedicated to the Confederacy.