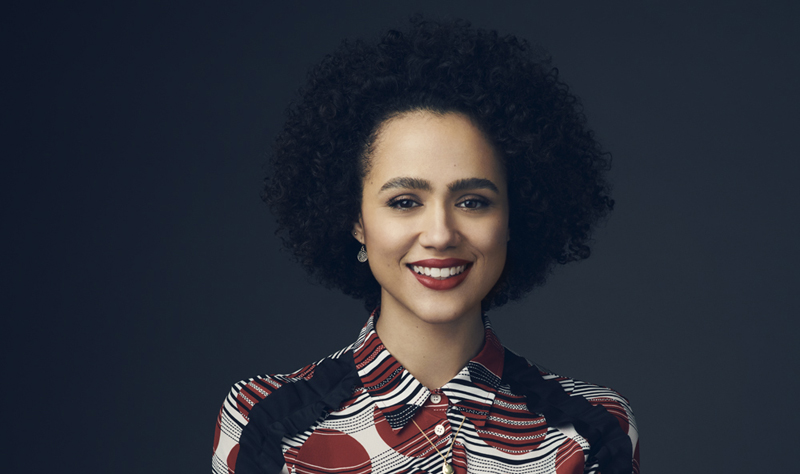 At first glance, you’ll notice her bright eyes, big smile and even bigger bush of intricately coiled curls atop her crown. And once she begins speaking, her British accent might both alarm and charm you. But when you dig a little deeper, you’ll learn that Nathalie Emmanuel wasn’t always confident and secure in the things that made her uniquely her.

The 31-year-old British actress, who worked her way into the hearts of millions as Missandei in the global phenomenon, HBO’s Game of Thrones, is quickly building a career that’s forced everyone to take notice.

While she’s now developed a strong sense of self, it wasn’t always present. As a Black mixed-heritage child, growing up in Southend-on-Sea, a predominately white town in Essex, England, Emmanuel knew first-hand the impact representation can have. For her, the English pop girl group, the Spice Girls, was the first time she saw someone, who looked like her reach a high level of success. Watching Mel B gave Emmanuel the power to manifest things in her life that may have seemed out of bounds.

Premiering on Quibi, a short-form streaming platform, we’ll get to see her alongside Kevin Hart, John Travolta and Jean Reno in Die Hart. In this new 10-episode comedy-action series, Hart plays a version of himself, who’s trying to step outside of the comedic sidekick role. In Die Hart, he attends the world’s greatest action-star school, and Emmanuel is his confident and strong-willed rival classmate.

ESSENCE recently caught up with Emmanuel, who’s now breaking through Hollywood’s doors and showing everyone that she can hold her own next to some of the industry’s veterans.

ESSENCE: So most of the world knows you as Missandei, but who is Nathalie Emmanuel?

Nathalie Emmanuel: I haven’t been asked that before—that’s a big question. Nathalie Emmanuel is very outspoken, determined and ambitious. I am passionate about my friends, my family, my craft, and I’m passionate about yoga. I’m a trained yoga teacher. And apparently, my transition to a much older person has already happened because I love to stay at home and sew. My family and friends always laugh at me because they’re like, ‘You literarily just stay at home drinking tea and sewing, with your slippers on.’

Speaking of home, are you still in London or have you moved to the U.S.?

Yeah, London is my base. I have a home here where the majority of my things are, but I often am traveling and working in different places. But I do like to dedicate time in the States because it’s a really great place to come and meet for other work opportunities. And I love various cities in the States, so I tend to just like, hang out there anyway.

When did you first visit the U.S., and is there a city here that you’ve fell in love with?

My first time in the States, I was 22 and I went to Los Angeles, which I like. It’s got a lot to offer, but I’m also a big fan of Atlanta. It’s such a cool city with so much culture. It’s got that Southern hospitality, but also it’s really cosmopolitan with loads of great cultural hotspots. I’ve shot four projects there now and I just love it.

Die Hart, which premiered earlier this week, is your newest project with Kevin Hart and John Travolta. Did you also film that in Atlanta, and how was that experience?

Yes, we filmed in Atlanta and from the moment I got there, [my co-stars] were just so wonderful and warm. From the second I opened that script and read it, I was like, ‘First of all, this is hilarious.‘ It’s wholesome. It’s silly, it’s dramatic, it’s action. It’s so unusual this thing that we’ve had the joy of making. I’ve not seen anything else like it.

Kevin is one of the hardest working people I’ve ever met in my life, but he still makes time to really make you feel welcomed. It’s hard working across from him because he’s so funny and I’m playing this more serious and straight character, who is just looking at him like, ‘What the hell is going on?‘

John Travolta is a Hollywood legend. How was it working with him?

John is just so sweet and his energy is so calm, and it was brilliant to watch him. He’s got such incredible range. I’ve worked with some amazing people, and I’m still like, ‘What? How is this my life?’ I never want that feeling to go away.

And while you’re a huge fan of those actors, millions are huge fans of you because of your remarkable performance for six seasons in Game of Thrones. How did you land that role?

First, I was one-hundred percent a fan of the show. I had been watching the show before I even auditioned for it. I used to phone my agent and be like, ‘Do you ever hear anything from the casting office for Game of Thrones?’ I knew that they didn’t really cast people that looked like me. There were definitely a few throughout the seasons, but not regular established roles that had ongoing storylines. And so I told her, ‘Oh, I really want to be in that show. If they ever have a character that looks like me or can look like me, I really want to audition for it.’

So it’s fair to say that you manifested the role of Missandei?

Yeah. So, when that casting came in, I saw it on some casting breakdown website. Then I phoned my agent and she went, ‘I’ve already seen it. You’ve got an audition on Wednesday.’ I was desperate for an audition. I was like, ‘I want to be a part of that.‘

You definitely became more than a part of it. You were the only woman of color who was a regular on the show. Did you know that you were looked at as a representation for people of color?

I probably wasn’t as aware as I maybe should’ve or could’ve been. I was a much younger, inexperienced woman then, and I didn’t realize how big of an impact it would be on a platform like that. Because I’m like, ‘I know what it’s like to be a woman of Black mixed heritage in this world. I know what that means, I’ve lived this life.’ Then, you go into a space like that and suddenly you realize what it really means because you’ve got millions of people, reacting and responding to it.

Do you welcome that responsibility?

I do welcome it. Sometimes I feel completely ill-equipped to handle it because I’m like, ‘I’m just one person, how can I possibly represent everyone of color? That’s just impossible.’ We’re such a beautifully diverse group of people. It’s a huge responsibility and it can be a little overwhelming and a little scary, but I’m always trying to be engaged with conversations that don’t necessarily center around me and my experience.

Growing up, was representation in the entertainment industry an issue for you?

One-hundred percent. Any person of color or of any kind of minority group is so used to not seeing themselves represented anywhere. And I definitely had that growing up. I literally remember seeing the Spice Girls and seeing Mel B and being like, ‘Oh my God, there’s a brown girl in it. She’s got an Afro and she looks like me.’ And so when it comes to representation, when I started pursuing this career, I always knew that my being anywhere was important.

Are you proud of where you are in your career?

Someone once said to me, ‘You need to be much more confident and proud of your achievements,’ because I was always so reserved about expressing the great and very exciting thing that I’m doing or have done. I think it’s a cultural thing. Many English people tend to keep their cards close to their chest a little bit and play everything down.

Spending a lot more time in America and feeding off the energy that people seem to have there actually gave me permission to be proud of myself and not think it’s boasting when I’m like, ‘No, I have achieved this really great thing because I’ve really worked hard for it.‘ I just found that kind of sense of self a little bit in America.