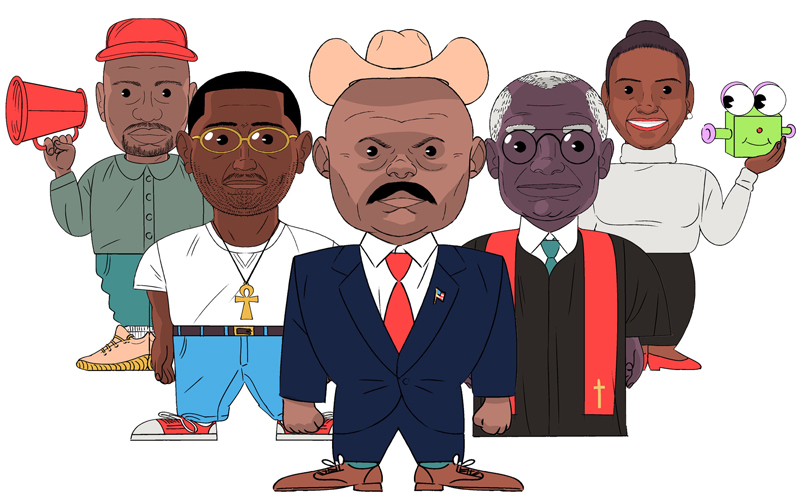 AsDemocratic demographics go, Black folks can be pretty conservative. We can be counted on to vote Democratic 90% of the time at any level of government, but for most of us it’s simply a matter of pragmatism. We are literally just trying to stay alive, so we vote for politicians whose platforms don’t seem to want us dead. At the same time, a history long subjected to European-defined religion, state violence, and anti-Black socialization has left us collectively leaning into capitalism as a balm, struggling against toxic self-definitions, and all too frequently sporting a homophobia kicker against the better angels of our nature.

And then there are those Black people who cut themselves off from the herd entirely, who throw Blackness under the bus for personal gain to such a degree that its calculation is crystal clear.

We don’t always know exactly where such Black people come from. Perhaps there was a trauma in their upbringing, a brush with White supremacy that stunted their self-worth. Maybe there was a teacher who took their skin to task, or an absent parent who was not present to stem the tide of self-hate they might otherwise absorb from the world around them. What we do know is that they have zero interest in interrogating the realities of any Black life beyond their own. We also know that they’re not interested in Black people because they’re never talking to Black people. Their audiences are almost entirely White. And like most White-facing, self-effacing things, such behavior comes with its own round of benefits.

As the end of election season dots the horizon, it’s a good time to get familiar with the kind of Black supporters Trump has been able to amass. While only a sliver of voters, these species consume 50 times their weight in bandwidth, and should be rooted out for the distractions they are.

Personal achievement is a hell of a drug. For people who have convinced themselves that they have pulled up their own bootstraps without owing anything to the legacy of Blackness, racism may as well not exist. As they see it, any racism a Black person may experience is largely that person’s own fault — for not having been the right kind of Black person, or a good enough Black person, or a Black person who understands resiliency. They believe in a convenient racism, a system that allows them to profit from pointing it out for White people, but not as a White problem. Some tokens love being the only one in the room; all the scraps wrapped up as rewards go solely to them.

Mating Call: “What I need Saturday Night Live and the liberals to improve on is, if [Donald Trump] don’t look good, we don’t look good. This is our president. He has to be the freshest, the flyest, the flyest planes, the best factories, and we have to make our core be empowered.” (Kanye West)

The Change Purse Rattler is an opportunistic feeder posing as the id of toxic Whiteness. They say all of the things that angry White people wish they could say — not because they believe these things, but because there is something to be gained from the shock value of seeing a Black person say them. The plumage of such bottom feeders is always a bit extravagant, as they frequently make a habit of saying more than any given situation calls for. Take note, observers lured in by their mating call: There is almost always something being sold on the back end of their presentation.

Habitat: Primarily churches, though sometimes found in the shallows of the West Wing

Mating Call: “This is probably going to be…the most pro-Black president that we’ve had in our lifetime.” (Rev. Darrell Scott)

There is a wavering line between a Trump supporter and a conservative, its width always in flux. Black evangelicals may be somewhat conservative in their views, but ultimately they live where they live and work where they work, so they vote for their practical reality. Black religious leadership, however, is far less politically malleable. Like Jesus multiplying bread and fishes, they can make a feast of the crumbs that fall from the tables of powerful people. They are quick to lay hands on the shoulders of these powerful people, knowing that, with the turn of a wrist, they’re in the best position to receive silver coins. They want Heaven on Earth now — and Heaven costs money. The Dr. King strain of this group has been on the verge of extinction for decades, supplanted by those with titles self-appointed and flocks questionably tended.

Habitat: The lecterns and lounges of Republican National Conventions

Mating Call: “First off, there is no police brutality in America. We ended that back in the ’60s.” (Sheriff David Clarke)

What happened to Uncle Tom has always fascinated me. Introduced in Harriet Beecher Stowe’s 1852 antislavery novel Uncle Tom’s Cabin, the titular character closes out the novel as a martyr, choosing to die rather than reveal the location of two runaway slaves. After the blockbuster success of the book, “Tom shows” — plays and musicals based on the book — set out to capture the novel for White audiences, but changed the nature of Uncle Tom to a shifty sellout in order to make him more palatable. And since watching shows was more popular than reading, the Uncle Tom-as-sellout trope was born. Uncle Tom may have been naive and overly sympathetic, or perhaps just written by a White woman, but dies a hero nonetheless. Privilege destructa are quick to tell you that people often call them Uncle Toms, which I think is hilarious. I would never call such people Uncle Toms. They don’t deserve it.

This supporter is a bit of a chameleon: They get that Black people have a tough row to hoe, but have watched enough Hotep YouTube channels to be just woke enough to intellectually lap themselves. Often found speaking in unnecessarily confounding what-if scenarios, these people regularly trap others in dichotomy loops with bait like, “Black Lives Matter is Black supremacy.” All of this logical leapfrogging is just a mask for what they really like about the president: Trump is a gangster rapper. He is a rampant misogynist, loves gold, and says whatever occurs to him regardless of — and seemingly without — consequences. He is evidence that being an asshole can succeed beyond your wildest dreams. If you’re a certain kind of brother whose ideological regimen consists of conspiracy videos, Trump will have you out here looking at him like he’s a wizard thug. Suffice it to say, the final scene of Animal Farm, where the once-loyal swine have taken residence at the dinner table alongside the humans who subjugated them, is utterly lost on these people.