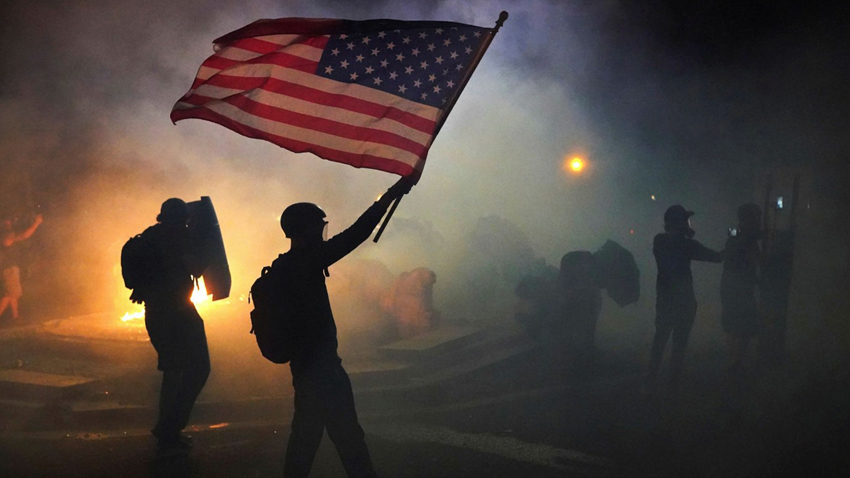 How One of America’s Whitest Cities Became the Center of the B.L.M. Protests

Seyi Fasoranti, a chemist who moved to Oregon from the East Coast six months ago, has watched the Black Lives Matter protests in Portland with fascination. A sea of white faces in one of the whitest major American cities has cried out for racial justice every night for nearly two months.

“It’s something I joke about with my friends,” Mr. Fasoranti, who is Black, said over the din of protest chants this week. “There are more Black Lives Matter signs in Portland than Black people.”

Loud advocacy has been a hallmark of Portland life for decades, but unlike past protests over environmental policies or foreign wars, racism is a more complicated topic in Oregon, one that is intertwined with demographics and the state’s legacy of some of the most brutal anti-Black laws in the nation.

During 56 straight nights of protests here, throngs of largely white protesters have raised their fists in the air and chanted, “This is not a riot, it’s a revolution.” They have thrown water bottles at the federal courthouse, tried to pry off the plywood that protects the entrance and engaged in running battles with police officers through clouds of tear gas. In recent nights, the number of protesters has swollen into the thousands.

Damany Igwé, 43, a bath products salesman who is Black and has taken part in dozens of the protests, says white crowds have shielded him from the police, all the while yelling “Black power!”

“I feel the most protected that I ever have in my city,” Mr. Igwé said during a Wednesday night protest that lasted well into Thursday morning. “White people can’t understand what we’ve been through completely, but they are trying to empathize. That’s a beginning.”

Of the 35 cities in the United States with populations larger than 500,000, Portland is the whitest, according to census data, with 71 percent of residents categorized as non-Latino whites.

Oregon’s relative homogeneity — the state is three-quarters white compared with neighboring California, where white people make up 37 percent of the population — was not accidental. The state was founded on principles of white supremacy. A 19th-century lash law called for whipping any Black person found in the state. In the early part of the 20th century Oregon’s Legislature was dominated by members of the Ku Klux Klan.

Today the average income level for Black families in Portland is nearly half that of white residents, and police shootings of Black residents are disproportionate to their 6 percent share of the population. Three years ago, two good Samaritans were fatally stabbed while trying to stop a man from shouting slurs at two African-American women on a commuter train, one of whom was wearing Muslim dress.

“Really there are two Portlands that exist,” said Walidah Imarisha, a scholar of Black history in Oregon. “There’s white Portland and Portland of color.”

Yet on the streets this week in Portland there was optimism among Black protest leaders who generally spoke admiringly of the large white crowds, which were reinvigorated last week after clashes with federal riot police officers who are protecting a U.S. courthouse and other buildings.

Xavier Warner, a Black protest organizer, called the predominance of white protesters “a beautiful thing” that speaks to the progressive ethos in the city.

Teal Lindseth, another Black organizer, said she saw the irony in predominantly white Portland having among the longest continuous protests stemming from the police killing of George Floyd in Minneapolis on May 25. But she said she was thankful for the strength in numbers. “They hurt us less when there are more people,” she said.

The role of white protesters has some detractors in the Black community.

In an op-ed published Thursday in The Washington Post, the Rev. E.D. Mondainé, the president of the Portland branch of the N.A.A.C.P., called the protests a “spectacle” that distracted attention from the Black Lives Matter movement.

“Are they really furthering the cause of justice, or is this another example of white co-optation?” he wrote.

But in a measure of the divided opinion on this question, Mr. Mondainé’s predecessor at the N.A.A.C.P., Jo Ann Hardesty, a city commissioner, rejected his criticism.

“There’s a lot of new, aware folks who have joined into the battle for Black lives,” she said during a news conference on Thursday.

Ms. Hardesty, who took office in 2019 as the first African-American woman on the Portland City Council, said the protests were serving the dual purposes of fighting racial injustice and rejecting the presence of federal agents sent to the city by the Trump administration.

Both protest goals were important, she said. “And one is not any more important than the other.”

Joe Lowndes, an expert on right-wing politics and race at the University of Oregon, said the protests reflected an intertwining of interests in recent years between racial justice advocates and the largely white anti-fascist movement. Both are deeply distrustful of the police and want police powers and budgets curtailed. The presence of far-right groups in Oregon, emboldened during the Trump administration, has also brought anti-racists and anti-fascists into closer alignment, he said.

Speeches and chants at the protests have touched on the legacy of slavery and the stripping of lands from Native Americans. From a historical perspective, the sight of hundreds of white protesters chanting one of that movement’s most popular refrains — “Stolen lands and stolen people” — can be jarring.

As the destination of the Lewis and Clark expeditions, Oregon once symbolized the conquest of the American West and the subjugation of Native peoples.

Some white protesters said it was this white supremacist legacy that helped spur them into the streets.

“Bringing that history to light is definitely a motivating factor,” said Liza Lopetrone, a veterinary nurse who joined the Wall of Moms protest this week that consisted mostly of white women locking arms in the face of the federal agents. “Oregon has an extremely racist history. I’m not from here but I take responsibility for it now.”

Another woman at the protest, Julie Liggins, had a more immediate connection to prejudice and racism in Portland. She is white and her husband of three decades, Reginald, is Black.

During the years he drove his car to work, Mr. Liggins said, he was pulled over by Portland police multiple times without cause. He said he switched to riding the bus. But two years ago when Mr. Liggins, who is 60, ran to catch a bus, the police pulled it over after misidentifying him for a robbery suspect in his 20s.

Mr. Liggins said he was encouraged by the protests even if he wished the reckoning over race in America had occurred earlier. And he loves his life in Portland.

“You can literally go days without seeing people that look like you,” he said. “But I find Portland to be a very progressive city despite its racist past. I can honestly say that as an interracial couple we haven’t had any problems here.”

Mr. Fasoranti, the chemist, says he has been impressed with the awareness of racial issues in Portland and described the current round of protests as something that “feels genuine.”

He says he feels welcome in the city and was intrigued soon after he arrived when a white motorist pulled over to the sidewalk and asked if he needed a ride. He has been invited to conversations about gentrification and the displacement of Black residents.

“There are less of these conversations in New York or New Jersey, where I used to live,” he said.