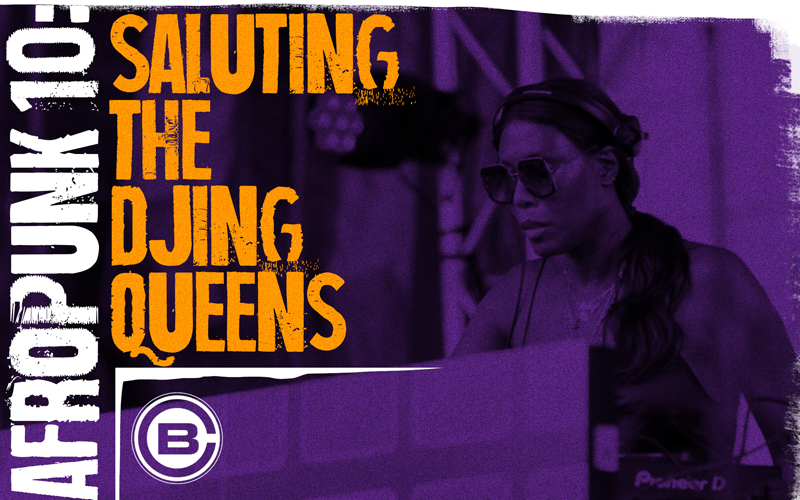 I’ll be honest: we first started planing this feature on our favorite Black and Brown femme DJs from around the world and the AFROPUNK diaspora before the pandemic hit, as part of Womxn’s History month. And on some level, publishing it right now seems kinda frivolous. Like, who can think of this as a good time for dancing?

Except. Humans have always danced, it is a ritual expression joy and creativity and spiritual uplift. The art of the DJ as a conduit of joyful dancing was born in the Black communities — New York, Detroit and Chicago central to them, but everywhere that Black people “invented” Saturday night. And now more than ever. Black femmes DJs are guiding it into a new era. From the U.S. to the dance clubs or Europe, to parties around Africa and the Caribbean, the game is changing.

The 10 DJs below (presented in alphabetical order) are only the tip of a great iceberg, that no pandemic will ever stop. (In fact, many of them are live-streaming DJ sets regularly from the quarantine — stay tuned to AFROPUNK socials for announcements on these.) We can’t wait to meet you back on the dance-floor. But until then, let’s salute the DJ Queens.

Originally hailing from the hometown of techno, Ashleigh Laurynnow lives in Atlanta, GA, reps both her own great Underground & Black (blog, radio show, podcast) and the Deep South ATL party. In addition to being an exceptional DJ, she is also a superlative writer. Lauryn’s vibe is Detroit Techno — though, as anyone familiar with that city’s hi-tech soul legacy understands, that’s a tradition which contains a multitude of Black musical experiences.

London-born, Philly-based DJ/producer Bearcat (born: Kerrie Ann Murphy) brings the roughness and the global knowledge, moving from industrial techno to bass-first dembow with the fluidity of someone who’s been putting the two together for much of her life. You can find her at the great monthly party Seltzer (which she co-founded with Precolumbia, and which takes place in both West Philly and Ridgewood, Queens), making music for Fashion Week runways, and dropping bass bombs around the world.

Born Tina Dunham, Diamond Kuts is the daughter of legendary Philly MC, Grand Tone, who introduced her to DJing by giving her a turntable for Christmas as a child. We first heard her through her slew of incredible weekend DJ shows on Philly’s Power99, where she was cutting up hip-hop, house, pop and R&B tracks in the B’more and Jersey club styles. Diamond Kuts is still there — on the mix is pure, hyperactive fire — and now she produces too.

Growing up in New York City and being into house music when it was NOT the flavor of the f*cking month, we had the thrill of hearing Chicago transplant Honey Redmond spin on the regular. Which makes us that much more overjoyed that Honey Dijon is now recognized as one of the finest, most popular mixers and selectors in the world. Not just a rare Black femme that headlines lily-white-boy dance-music festival stages, but has her own Comme des Garcons line and shit. And *still* has better records than you.

One of the most influential DJs in London’s Black musical diaspora, Josey Rebelle rose to prominence as a resident at Plastic People, the legendary club that closed in 2015 and was famous for its musical anything-goes ethos. That is still very much her style, whether on her excellent Sunday night Rinse.FM show — the mix above is from the last one she did, and the first in the age of corona — or at headlining gigs all over the world.

Juliana Huxtable is who we think of when we think of the DJ as a contemporary artist. (As opposed to famous artists who think they know how to DJ…usually, a must to avoid.) Huxtable’s DJ sets are not only there to set off dance-floors, but to explore the intersections of race, gender, queerness, and identity, through sound. (Juliana also does this with performances and visual art.)  She’s in the tradition of the griot and the storyteller, whose tools are two decks, a mixer and a lifetime of sonic sources.

Lakuti is the South Africa-born Berliner Lerato Khati, an incredible house/funk/jazz/anything-goes DJ and also the founder of Uzuri, a talent management company, booking agency and record label which has been a leader of global Black dance-music creativity by example. For us Americans, with our fucked international-artist visa laws, hearing Lakuti is an all-too rare treat, but if you ever get the chance, run to that club. And be ready to get all-in.

The record queen of New York City, Natasha Diggs is a musical engine of two of the best grown-ass people dance parties in the Big Apple: Mobile Mondays and Soul in the Horn. Her vibe is funk, soul and the classics, whichever direction and era that might entail. And setting off the proceedings, especially peak-time selections, is guaranteed. Fuck everything else, Natasha Diggs is very much a great singular reason to visit NYC when the dance-floors re-open.

The Queen of Jersey Club, Uniiqu3 (born: Cherise Gary), is one of the great perennials — never not delivering, always expanding. When she made this mix for AFROPUNK in 2019, she said “I like to tell take my audience on a journey and give them a experience. On this mix is a blend of Jersey Club, House, GQOM, Baile Funk, Hip-Hop and Ballroom. It’s the soundtrack that fuels the underground out here on the East Coast.” Believe that.

Back during the last time the entire planet seemed to be heading for man-made meltdown, one party staved off the apocalypse in NYC, GHE20G0TH1K. And over the course of that party’s initial run, one of its architects, Venus X, helped reshape the sound of dance-floor, cutting up hip-hop, baile funk, dembow, African, house and club beats, experimental noise, techno, everything under the sun. Venus is still going strong, and this incredible mix she made with Asmara (of LA’s great Nguzunguzu) is proof.