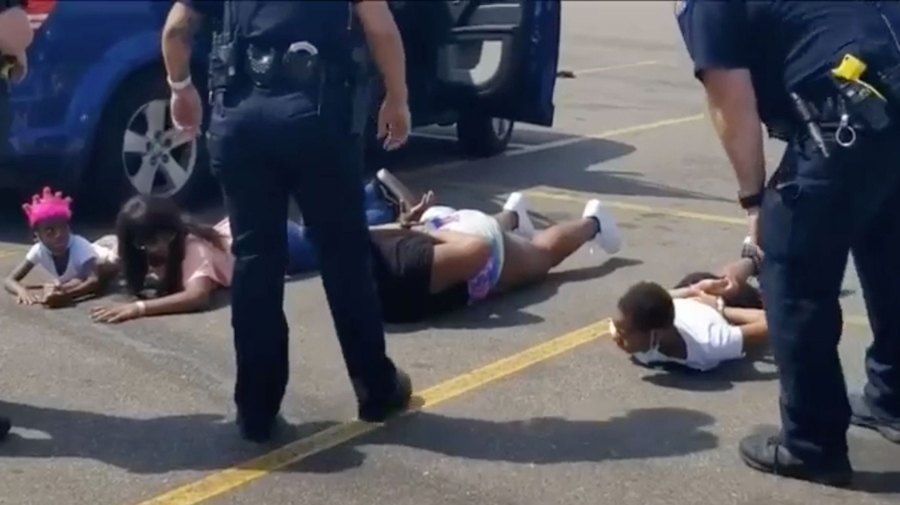 Police in Aurora, Colorado, detained and handcuffed a Black mother and four children at gunpoint Sunday after mistakenly identifying the SUV she was driving as a stolen motorcycle.

Video of the incident shared by witness Jenni Wurtz shows Brittany Gilliam and four children, including her sister, two nieces and 6-year-old daughter, lying face down on the asphalt in a strip mall parking lot, surrounded by officers.

“I actually didn’t know what I was watching when I first started seeing what was happening. I’d never seen a gun that close,” Wurtz told CBS Denver. “I went from seeing kids in a car to seeing a gun pointed at the kids in the car.”

“I am not anti-police,” she added to ABC 7. “I am anti what happened yesterday, and that was ridiculous.”

The Aurora Police Department told 9News Gilliam’s license plate matched up with one belonging to a motorcycle from a different state that had been reported stolen earlier Sunday morning.

Adding to the confusion, Gilliam’s own car was also reported stolen in February, though it was recovered the next day.

That explanation is of little solace to Gilliam, who is upset about the officers’ tactics.

Gilliam said she and the children were trying to get their nails done when officers approached the car with their guns drawn and ordered them out of the vehicle. The family was uncuffed and the officers apologized after they realized the mistake.

“I’m livid. I’m angry,” she told CBS Denver. “Those kids are not OK. They’re never going to be OK. That was a traumatic experience. Would your kids be OK after that? Having a gun pulled on them and laid on the ground. Especially a 6 year old.”

In a statement, interim Police Chief Vanessa Wilson apologized to the family and said that APD officers are trained to treat suspected stolen cars as “a high-risk stop.” That involves drawing their weapons and forcing all occupants to exit the vehicle. She acknowledged that moving forward, officers should be allowed to alter their approach when circumstances clearly call for it.

“I have called the family to apologize and to offer any help we can provide, especially for the children who may have been traumatized by yesterday’s events,” she said. “I have reached out to our victim advocates so we can offer age-appropriate therapy that the city will cover.”

Wilson was appointed Chief of Police Tuesday, taking the top job at an embattled department. Last August, Aurora officers stopped 23-year-old Elijah McClain as he was walking home from a convenience store, setting off a chain of events that led to McClain’s death. McClain was never accused of a crime.