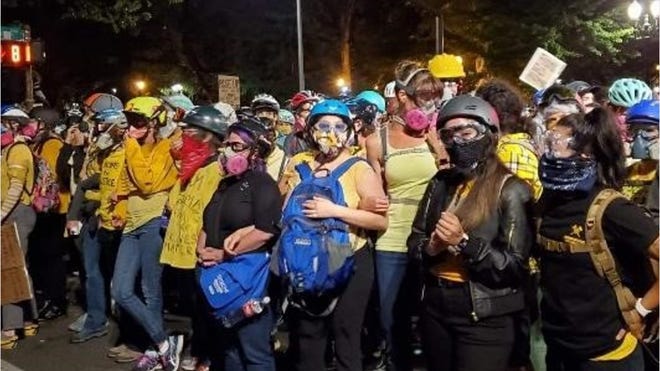 Two months after the death of George Floyd in Minneapolis sparked nationwide protests against racial injustice and a week after President Donald Trump sent federal officers toPortland to confront activists, another night of chaos unfolded in this largely liberal, mostly white city where residents have continuously taken to the streets to demand substantive police reform.

“There’s not a lot of things people like us can do. We can vote, but does that really make a difference when the system is so stacked against us?” said Fae Preston, 21, a protester who described herself as a minimum-wage worker. “Government’s purpose is to serve the people. This is showing they are not serving us.”

Preston, who is white, said that while it’s clear there are some “bored white kids” at the protest, the majority truly want systemic change.

The violence unfolded only a day after Mayor Ted Wheeler tried Wednesday night to talk protesters down. Hours later, he was tear-gassed by federal officials alongside activists after a small number of the thousand-person crowd threw flaming garbage over the fence.

It remains unclear whether federal agents knew the mayor was in the crowd when they began tear-gassing activists, although at the time he was accompanied by television cameras and a security detail.

“What I saw last night was powerful in many ways. I listened, heard, and stood with protesters. And I saw what it means when the federal government unleashes paramilitary forces against its own people,” Wheeler said in a statement Thursday. “It is unconscionable and un-American. We are all committed to change – this must stop so the work can move forward.”

Trump said he sent in the federal agents to restore order across Portland, arguing that Wheeler hasn’t done enough to rein in protesters. Speaking on FOX News Thursday, the president called Wheeler’s presence at the protest “pathetic” because the mayor is so unpopular among protesters demanding change from the city’s police department.

“He wanted to be among the people so he went into the crowd and they knocked the hell out of him,” Trump said. “That was the end of him.”

Of particular concern for protesters is that the federal agents are not wearing any identification aside from patches denoting which department they work for. Members of Congress have prompted the Inspectors General of the departments of Justice and Homeland Security to open an investigation into whether agents from the agencies were properly trained, deployed and identified.

For more than an hour on Thursday evening, activist Edreece Phillips, 48, a Black hip-hop artist who’s been protesting for weeks, had been keeping protesters and sightseers off the fence enclosing the federal courthouse. He said he’d talked to federal officials earlier in the day and said they’d agreed that if protesters stayed back, agents would stay inside the courthouse.

“They don’t come out unless we try to get in,” Phillips said. “All that stuff people are doing is making it so that Black voices are being heard less and less and less.”Get the Coronavirus Watch newsletter in your inbox.

At one point, Phillips warily watched as other protesters drifted closer to the federal building. He then snatched a sign from a young man and stomped on it.

“I am sick of you doing this,” Phillips yelled to the protester, who was dressed in all black, goggles atop his head and a respirator dangling from his neck. “I have warned you already. I’m sick of it.”

The young man responded with some quiet words but didn’t move. In reply, Phillips punched the man several times, knocking him to the ground.

Another protester, Teal Lindseth, 21, then turned on Phillips.

“Do not come out here to fight!” she screamed at him as a crowd surrounded them. “We can’t afford violence.”

The night before, small groups of white protesters aligned with Black Lives Matter had thrown water bottles at the federal court building, shot fireworks at the front doors and tried to shake the fence loose.

“A lot of the people who are doing it are not Black. They throw shit and start shit and run away and yell ‘Black Lives Matter,’ and then go home and take off their clothes. But I can’t take off my black,” Phillips said. “And the more damage they do to this building— well, everyone thinks it’s people of color doing all this and it’s not. “

As in many cities, the protests in Portland began following the death of Floyd, a Black man who died after a police officer kneeled on his neck for more than eight minutes over a 911 call reporting an alleged counterfeit $20 bill.

Critics questioned whether the president was testing out heavy-handed enforcement in Portland before moving on to more diverse cities such as Detroit or Chicago. Portland is 77% white and 6% Black, with roughly 40,000 Black people in the city.

Ellayna Morris, a 35-year-old white college professor and protester, said some were content to march peacefully, while others prefer to take more direct action. She said it wasn’t her place to tell others how to express themselves.

“Black people are tired of dying in the streets,” said Morris.